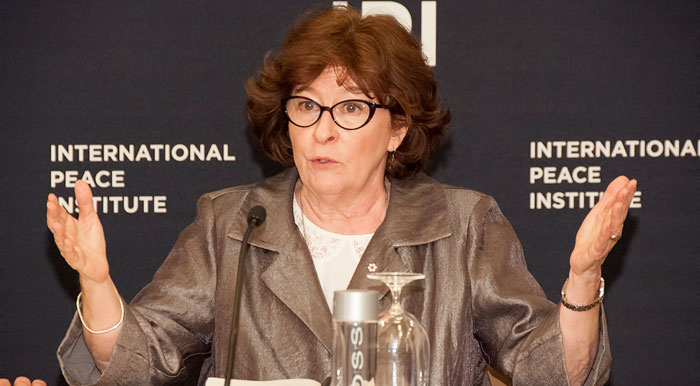 “In my understanding of the rule of law, fundamentally, what the rule of law means is that it embraces the principle of equality before the law,” Louise Arbour, president of the International Crisis Group (ICG), told an IPI audience on May 10, 2012. Ms. Arbour outlined that this means that no one is above the law and everyone has both equal protection and equal benefit of the law.

“We are very good at building institutions,” she said. “We are very bad at transforming cultures when it comes to these fundamental premises of rule of law.”

Ms. Arbour focused on this, which will be the topic of a high-level meeting at the opening of the General Assembly this fall. Ms. Arbour has previously served as the chief prosecutor of the International Criminal Tribunals for the Former Yugoslavia and for Rwanda, a justice on the Supreme Court of Canada, and as the UN High Commissioner for Human Rights.

“We have not embraced the flexibility and the more fundamental promise that the rule of law really has to offer, both in the field of development and in the field of security,” she said. “The rule of law, in my opinion, is the centerpiece of the enterprise in which the legal profession is engaged. I am a little bit concerned that we are selling it on the cheap.”

“I think it will feature very prominently on the development agenda. I think many donor countries will be very attracted. It’s the new mantra after governance, democracy, now, rule of law,” she said.

She warned however, not to mistake rule of law simply for building law enforcement institutions. “I’m very concerned that we are once again to fall into the trappings of mistaking institutions for substance. Mistaking form for substance. Enormous amounts of money will go into the institutional trappings of the rule of law, which, in fact, is heard by many authorities as law enforcement, which particularly authoritarian regimes are very fond of,” she said.

“Why is it not good to simply enforce laws?” she asked. “It’s very good to enforce just laws; it’s very bad to enforce unjust laws.” This means that, “we should stop shying away from content. We should stop believing that if we build an anti-corruption commission, or a human rights commission in a country, we’ve made a great achievement. We’ve done nothing, unless there is a culture and political will and monitoring for content,” she said.

“If we can have a public conversation about what the protection of the law really means, that it’s not just about empowering states, whether they are democratic or not, in getting better at repression. It’s the same thing as capacity building. Before we build capacity, we should have a very sober diagnosis of what is the deficiency,” she said. “If the deficiency is a deficiency of political will, and you build logistical capacity for law enforcement, this is very bad. That means you’re developing the skills of a regime that has no real political will to create this kind of system of equal protection, and equal benefit of the law.”

“To build good, competent judicial systems,” she said, “You need decades, not six weeks’ training of judges by foreign judges who come from different legal systems, including Western systems that are barely affordable for Western countries, and therefore not easily exportable.”

Asked about the competing claims of pursuing justice and maintaining peace in conflicts, she recommended, “Completely separate, these tracks. Really completely… they are parallel tracks. Sometimes the tracks will be very far away from each other. Other times, they will be uncomfortably close, but there will be no suggestion that one gets traded away for the other. In my view, that’s the way to go, and it would require further distancing from the Security Council as a first step, but not the only one.”

Interview with Louise Arbour, President of ICG, on the Rule of Law