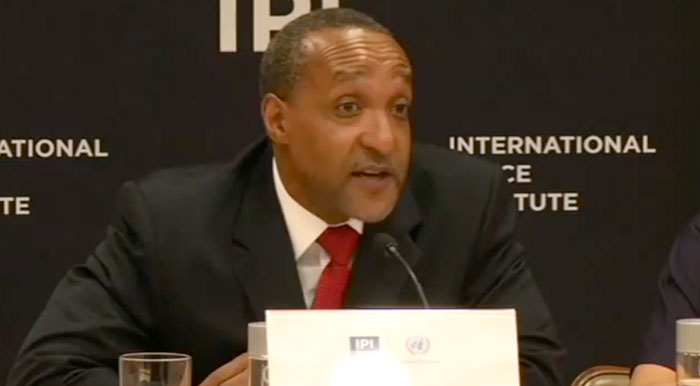 “One would think that the whole idea of south-south cooperation being a very critical and important part of what should be the solutions of what we face in the world would be a no-brainer,” Ambassador Macharia Kamau of Kenya told an IPI policy forum on May 24, 2012.He was speaking at an event on “South-South Cooperation for the Provision of Civilian Expertise in Post-conflict Settings,” cosponsored by the United Nations Civilian Capacities Project.

Speaking of the rapid transformations occurring in the world economy today, Ambassador Kamau said, “What we have witnessed in our parts of the world is that this transformation has truly changed the possibility for us as people who live in that part of the world. Our beacons of hope have actually shifted radically, because the countries that are able to bring their resources and expertise, and their surplus income…are those countries that are actually in the south.”

He continued, “These are countries in a position to do things that can radically change the opportunities for all our countries, and help us build lasting peace, stability, and economic progress.”

Utilizing these resources to address post-conflict situations, he said, “Building civilian capacity, seeking to utilize civilian capacity should be a no-brainer. The United Nations…it only has maybe 20,000 people at its disposal…that can be brought to bear on the challenges that countries around the world face on post-conflict. That’s simply too little, too few a capability.” Therefore, regional organizations and countries are required, and even best-placed, to help address the challenges, he said.

The other panelists were Ambassador Zahir Taninv of Afghanistan and Mitra Vasisht, Member of the Senior Advisory Group on Civilian Capacities. Ambassador Tanin said that “South-south cooperation has been integral to the development of [Afghanistan]” since 2001. In this reconstruction and development process, “north-south and south-south cooperation became part of each other,” he said.

In Afghanistan, “we have focused on regional cooperation. We work with a number of [regional] organizations.” This regional cooperation is so helpful and important because “we work in the same environments, we have the same experience. The villages that are in Afghanistan, or Pakistan, or Central Asia, or Iran, have a similarity of problems,” he said.

Ambassador Vasisht said the Advisory Group asked itself, “If UN peacekeeping could succeed, why not peacebuilding and post-conflict capacity strengthening?”

The consensus that emerged was, she said, “National capacity had to be strengthened, and those that existed before the conflict needed to be nurtured. Assistance asked for and given had to be demand-driven. The UN could not, and should not, attempt everything and had to look for strong partnerships.”

Ambassador Vasisht, who served as an Indian diplomat previously, spoke of India and Afghanistan’s development cooperation, calling it “another example of how shared development priorities in the same region could allow for a more successful cooperation.” India has been the largest aid donor from the Global south to Afghanistan since 2001.

“The priorities for this cooperation have been, and always will be, the priorities defined by Afghanistan,” she said. “In all areas of activity, India is happy to report that it discovered existence of local capacity, which has been tapped and very successfully retrained.”