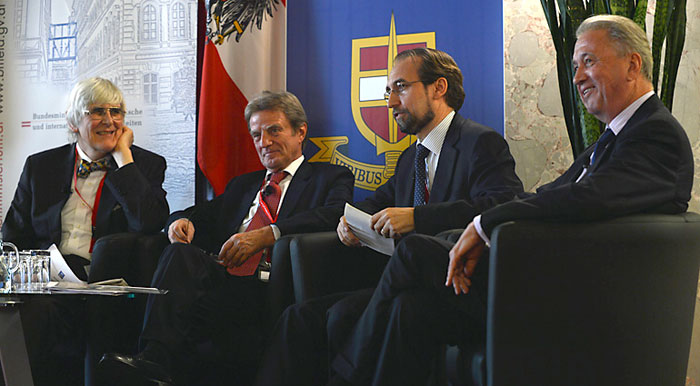 This year’s IPI Vienna Seminar, which took place on May 23-24th, focused on “The Uprisings: The Future of North Africa and the Middle East.” This 42nd session of the seminar attracted high-level participation and considerable interest because of recent dramatic developments in the region as well as the on-going civil war in Syria, elections in Egypt, rising tensions in Lebanon, and challenging transition processes in Libya, Tunisia, Yemen, and other countries of the region.

Over 100 participants took part, including senior government officials (particularly from the region), representatives of the diplomatic corps, experts from think tanks, as well as journalists and students.

The seminar–organized by the IPI Vienna Office together with the Austrian Federal Ministry of Defence and Sports and the Austrian Federal Ministry for European and International Affairs–began by looking at vulnerabilities and triggers for the uprisings: what was the dry wood, and what were the matches that ignited the tinder? Among the factors discussed were corruption, inequality, the large number of disaffected youth, unemployment, as well as discontent with governance and a desire for dignity and respect. The impact of the media and social networking were also highlighted.

It was noted that almost no one predicted the revolutions. At the same time, it was pointed out that dry wood had been piling up for some time – what was unpredictable was when a spark would set it ablaze. Indeed, the point was made that today the only thing that is predictable in the region is unpredictability. The question was asked about how much has really changed as a result of the uprisings, and what can be expected for the future. Clearly, the uprisings have created a revolution of expectations – many of which have yet to be met. The dangers of back-sliding and counter-revolutions were highlighted. So, too, was the need for patience. Comparisons were made with previous revolutions, such as those of 1848, 1989, and in Latin America.

Some participants expressed regret at how the hope and enthusiasm of the uprisings had been dashed. Others felt that the changes that have been set in motion are irreversible, albeit over time. In particular, public opinion now counts. As one participant put it, “the people have become bigger, while the leaders have become smaller.”

Participants discussed the new geo-political landscape–the waning influence of the United States in the region, and the rise of Turkey and Qatar. The increased assertiveness of the League of Arab States and the Gulf Cooperation Council was noted. At the same time, it was suggested that perhaps it is time to develop a new regional security arrangement.

The impact of political Islam was a recurrent theme, not least against the backdrop of presidential elections taking place in Egypt on the same days as the IPI Vienna Seminar. It was pointed out that Islamic parties may transform when obliged to deal with the daily challenges of governing. International and regional responses to the uprisings were examined. There was a lively debate about why action was taken in some countries (like Libya) but not others (like Syria). The point was made by several participants that long-term economic and humanitarian assistance are as important as short-term political and military support.

The implications of the Arab Spring for regional security were analyzed, not only between Israel and the Palestinians, but also in relation to Iran, Lebanon and Syria. Some felt that the dramatic changes were not helpful for the Middle East peace process since the parties are taking a wait-and-see approach. Others felt that this was an historic opportunity that should be seized. However, concern was expressed that the international community seems unable to properly support the transition process.

Overall, the mood was one of uncertainty, combined with a sense that we are witnessing an almost unprecedented moment in the history of North Africa and the Middle East. The true impact will not be evident for years to come. As one participant put it, “This is just the first few minutes in an historical hour for the Arab world.” As Mr. Rød-Larsen said in his remarks, “The challenge for us all is to ensure that the spark of revolution ignites a beacon of hope and not a wildfire of despair.”

A full meeting report will be published in the coming months.

In English:
ElBaradei Says Egypt Has Ways to Go (Associated Press, May 24, 2012)