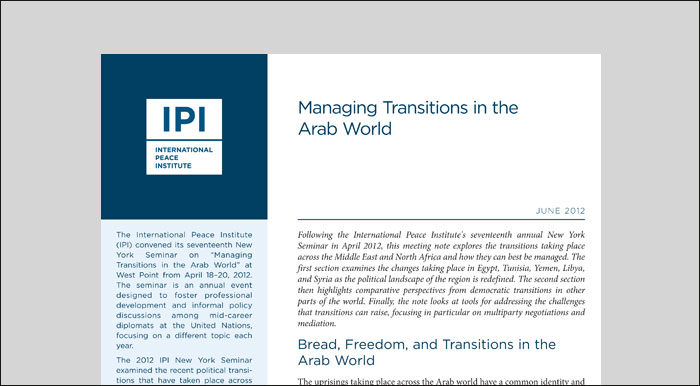 Despite their many differences, transitions taking place across the Arab world are united by demands for “bread and freedom.” They also share the common denominator of uncertainty. As turmoil and conflict continues in many places, what role can external actors play to facilitate democratic transitions in the region?

This meeting note presents a synthesis of discussions from IPI’s seventeenth annual New York Seminar in April 2012. Giving special attention to Egypt, Libya, Syria, Tunisia, and Yemen, the report examines the changes taking place across the region. It draws lessons from democratic transitions in other parts of the world and suggests ways that mediators and negotiators can address the challenges that these transitions raise.

Against the backdrop of an ever-changing political landscape, the report offers a number of insights and recommendations: