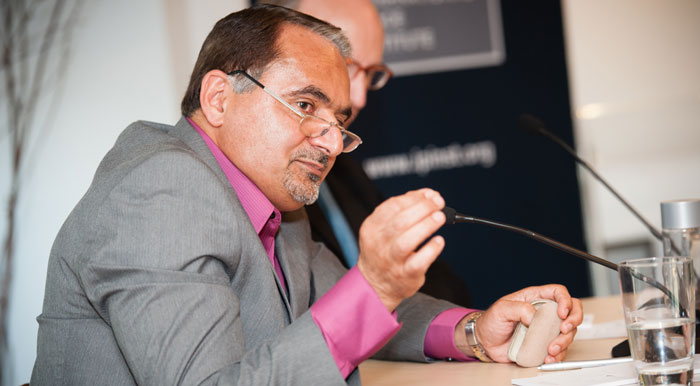 Mr. Mousavian served as spokesman for Iran’s nuclear negotiating team between 2003 and 2005 under President Mohammad Khatami and he is now a Research Scholar at Princeton University after falling out with the current Iranian government of President Mahmoud Ahmedinejad. He was speaking about his newly-published book, The Iranian Nuclear Crisis: A Memoir, in which he gives an insider’s perspective of negotiations on Iran’s nuclear program.

“Ninety percent of my book is explaining the Iranian perspective,” he said. “As long as you don’t understand the perspective of the other side of negotiation, the other point of view, how can you find a solution?”

He said that the key question to ask is, “Is the current status quo because of Iranian intentions or Western policies?” Sketching a historical perspective of Iran’s nuclear program, he said, “I believe the West pushed Iran to this situation.”

“The United States of America laid the foundation of a nuclear Iran, not clerics,” he said, explaining that the United States helped build Iran’s nuclear program beginning in the 1960s under Shah Mohammad Reza Pahlavi’s government. The “core issue” in today’s crisis, he said, is Iranian intentions about a nuclear bomb.

The Iran-Iraq war, he said, “changed Iranian security calculations, totally. It made Iran no other option to build up its military capability, nuclear capability to deter any further aggression, either by neighbors or by Western countries.”

Today, he said, “Iran has 15 neighbors. The United States of America is in the border of 12 countries around Iran. Believe me, Iran does not feel a threat about any of its neighbors…Iranians, they believe the US military presence in the Persian Gulf, in Pakistan, in Afghanistan, in Saudi Arabia, everywhere surrounding Iran with always threatening Iran.”

“The fact is economic war against Iran has already begun. Intelligence war, covert war, cyber war already has begun. I don’t see serious debates in the media in the US about possible consequences about these dimensions,” he said. “Iran is the most-sanctioned country in the world while it has not a single nuclear bomb.”

“The West needs to stop double standards. Double standards…to have strategic relations with countries that have nuclear bombs, they are not members of the NPT, and put all the sanctions of the world on a country which doesn’t have a nuclear bomb, and is a member of the NPT,” he said.

“Iran-US relations are a major factor. That’s why I have been proposing a dual package,” he said. “One package for the nuclear to be discussed between Iran and the P5+1, and one package between Iran and the US on all bilateral, regional, international issues to revive Iran-US relations, but a new relation based on non-interference and mutual respect.”

The event was moderated by Warren Hoge, IPI Senior Adviser on External Relations.