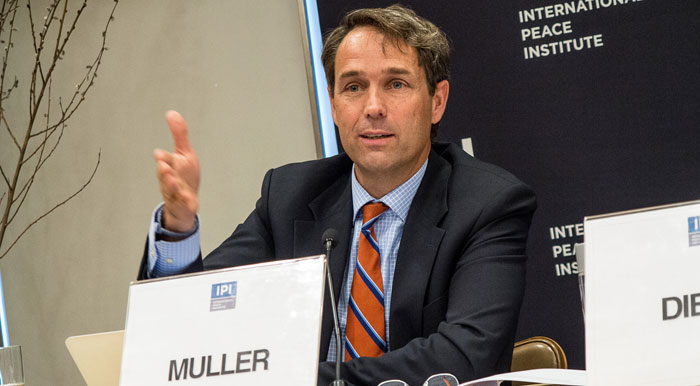 “In the rule of law, there is no “big bang”… rule of law very much is something bit by bit, you learn bit by bit, and that is how it develops,” Sam Muller, Director of the Hague Institute for the Internationalisation of Law (HiiL), told an IPI lunchtime policy forum on June 26, 2012. The forum focused on a report released that day, Innovations in the Rule of Law, prepared by HiiL and the World Justice Project (WJP) which highlights the significant progress made in the area of rule of law over the past five to ten years.

The other panelists included Juan Carlos Botero, Executive Director of WJP and Adama Dieng, UN Assistant Secretary-General and Registrar of the International Criminal Tribunal for Rwanda.

The event was one in a series of IPI’s preliminary looks at what is going to be the focus of the opening of the 67th session of the General Assembly–The Rule of Law. The Assembly will have a High-Level Meeting on The Rule of Law at the National and International Levels on Monday, September 24th, the eve of the opening.

“There is a lot more we can do in measuring and quantifying rule of law. Maybe we should have a little less belief in what it is, rule of law is great but when you’re actually trying to make it work, having some quantifiable, something to hold on to is very useful,” Mr. Muller said.

“National rule of law and international ‪rule of law‬ are intimately linked and to separate them is a big mistake. In rule of law programming, the two should go hand in hand,” he continued.

“The whole battle between top-down rule of law and institution building versus bottom-up rule of law is a ridiculous one. It’s a stupid one, because both are needed. There is a lot of mileage that we can get by understanding a little more about how those two work together,” he argued. “There’s absolutely no point in building great constitutions, and wonderful parliaments, and these kinds of structures, if there is nothing underneath. At the same time, there’s no point in building informal justice if it does not connect to something of a state-like structure.”

Mr. Botero also emphasized the arguments for better measurement in rule of law programming. “Improvements in measurement are fundamental, and they are both a way of collecting and using statistics at the country level and also at the level of integrating global public and private, qualitative and quantitative, global and national, to convey a more accurate picture of progress in countries,” he said.

“We know a lot more about performance-based statistics in baseball or in football in this country than we know about how many cases were filed in a district court,” he said.

Mr. Botero also spoke of using and applying knowledge from the south to enhance the rule of law. “We are not going to advance in this field if all knowledge comes from the North. Tremendous and very valuable knowledge coming from the South is very applicable,” he said.

“We cannot fully change in one day or one year the rules of the world. That is clear. We can make incremental improvements here and there. The knowledge is available, what is not is widespread dissemination.”

Mr. Dieng spoke more broadly about the concept of the rule of law and its implications. He said that rule of law should arbitrate international relations, even though a widely-agreed upon international definition of it is still only emerging.

“Rule of law at the international level can only be secured when states fully accept to be bound and act in accordance with the UN Charter and all the relevant international human rights instruments to achieve international peace and security for states and citizens,” he said.

Mr. Dieng also said that while rule of law promotion has had limited results so far, “there have been some stories that we all need to recognize and be proud of.”

He concluded that, “a textual understanding of the rule of law is not enough. We as a society need to internalize this concept. We need to actualize them in our daily functioning. We need to develop systems and institutions that will protect and promote these values when we have gone and our children inherit this earth.”

The event was moderated by IPI Senior Adviser for External Relations, Warren Hoge.