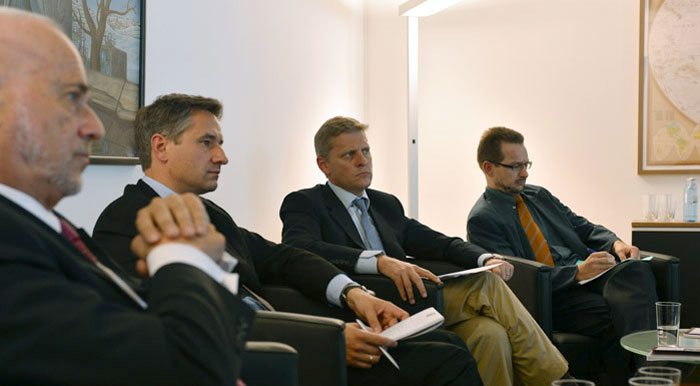 On June 26, which is UN International Day Against Drug Abuse and Illicit Trafficking, IPI Vienna officially launched a new publication entitled, “Spotting the Spoilers: A Guide to Analyzing Organized Crime in Fragile States.”

The publication, by Mark Shaw (of STATT Consulting) and Walter Kemp (IPI’s Director for Europe and Central Asia), is designed to help practitioners to analyze the nature of organized crime, particularly in fragile states. It is part of IPI’s “Peace without Crime” project which is funded by Norway and Switzerland.

Organized crime is a threat in almost every theater where the UN has peace operations, and several where it does not. “Policy makers now realize that there is a threat posed by organized crime, but they are less sure what to do about it,” said Mr. Kemp. “If we do not understand the nature of this threat and the conditions in which it thrives, we will not be able to tackle it–indeed, we may exacerbate it,” he said.

The publication looks at types of organized crime and how to identify criminal groups and activities. It also looks at the impacts of crime, for example in relation to political and structural, economic, physical, social and environmental harm. “There may be occasions when organized crime is actually beneficial to some actors, for example when they provide security or social resources–this needs to be understood,” said Mr. Shaw. “However, in the long run, the impact of organized crime is always negative.”

Reference was made to a recent article by Moises Naim in Foreign Affairs where he concludes that, “Devoting public money to reducing the power of criminal networks and mafia states will be useless or counterproductive unless the funds pay for policies grounded in a robust knowledge… The analytical frameworks that governments are currently applying are primitive and based on an outdated understanding of organized crime.”

Jan Petersen, Norway’s Ambassador to Austria and Permanent Representative to the United Nations at Vienna, underlined the need for raising more attention among political leaders about the dangers of organized crime. He expressed his hope that the IPI project could stimulate this process, particularly within the UN. Since March 2011, the UN has had a System Task Force on Transnational Organized Crime and Drug Trafficking.

Ambassador Thomas Greminger, Permanent Representative of Switzerland to the OSCE, UN, and the international organizations in Vienna, underlined the need for “mainstreaming” the issue of tackling organized crime at the national, regional and international levels. He also highlighted the challenge of engaging the development community in reducing vulnerability to crime. It is worth noting that on the same day, the UN General Assembly was holding a thematic debate on “Drugs and Crime as a Threat to Development.”

In the discussion, the point was made that it is not enough to identify problems–it is essential to work towards solutions. The importance of including crime-fighting in mission mandates was also raised.

The question was asked as to what should be done with the information compiled in the threat assessment. For example, what if the assessment shows that your interlocutors are involved in illicit activity? This and other complex issues related to organized crime will be tackled in the final Peace without Crime report due out at the end of this year.