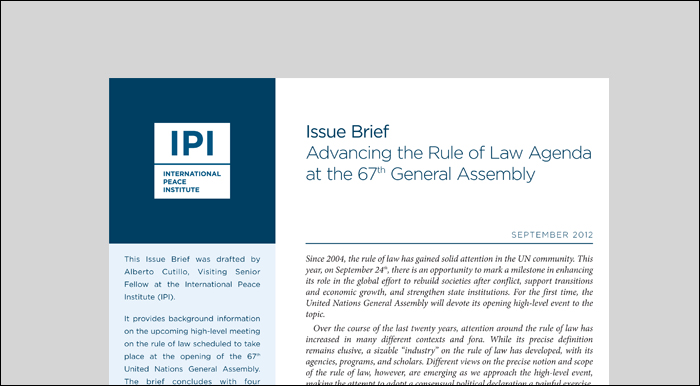 The rule of law has been gaining significant attention in the United Nations since 2004. Now, in 2012, the UN General Assembly will devote its opening high-level event to the topic for the first time. September 24th could mark a milestone in enhancing the role of the rule of law in the global effort to rebuild societies after conflict, support transitions and economic growth, and strengthen state institutions.

However, different views on the precise notion and scope of the rule of law are emerging as the high-level event approaches, making the attempt to adopt a consensual political declaration a painful exercise. This issue brief shows that a breakthrough is still possible, if additional political effort is made in the final steps.

After providing background information on the rule of law and the rise of the concept at the UN, the report addresses the upcoming high-level meeting and concludes with four realistic goals for the outcome of the event.