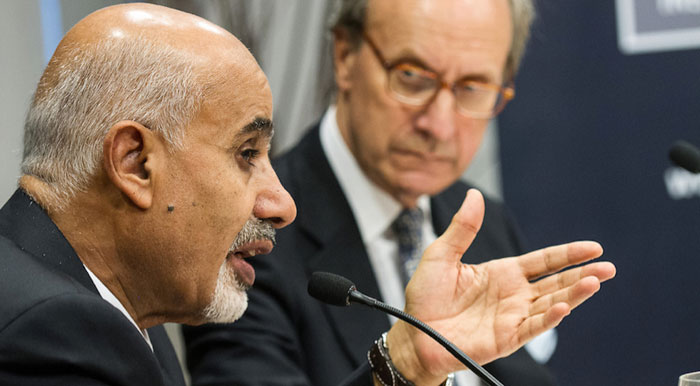 “In a new Libya, we seek not revenge but reconciliation, not exclusion but inclusiveness,” said Mohammad Yousef al-Magariaf, President of the General National Congress of Libya, during an IPI event on September 27, 2012. “We will protect civil liberties, human rights, especially for women and minorities. We will fight corruption and poverty, seeking a better standard of living for our people, to compensate them for decades of depravation and need.”

Mr. al-Magariaf also condemned the September 11, 2012 attacks on the US embassy in Libya and expressed condolences for the death of US Ambassador Christopher Stephens and the three US citizens and ten Libyans working alongside of him. “We appreciate the measured response of the United States administration,” he said. “We share with the American people in this tragic loss because we, too, lost a great friend of Libya who understood the Libyan cause of real freedom and rendered tremendous support for which the Libyan people will always be grateful.”

Following his speech, Mr. al-Magariaf engaged with IPI’s audience in an informal discussion. He addressed a variety of topics, including the role of religion in politics, constitution building, the rule of law, and the role of women in Libyan society.

When talking about religion, Mr. al-Magariaf was careful to separate the few extremists groups from the majority of Islamic society. He said, “If you talk to the majority of Libyans, you will find they have two characteristics in them. Number one, that they love their country, so they are nationalists. Number 2, they love their religion. This is the combination from which the Libyan fabric is made.”

On the future of alleged war criminal Saif al-Islam Qaddafi, the president said, “He will stand a trial. We will do our utmost to make sure it is a fair trial. After trial, he will pay his dues, then he will be an ordinary citizen in Libya… this is the new democratic Libya, a just Libya, a fair Libya.” He added, “The ICC has some understanding with the Libyan government that it is the prerogative of the Libyan government to try these accused.”

Alaa Murabit, founder of The Voice of Libyan Women (VLW), who had spoken on an IPI panel earlier that day, asked about the president’s plans to insure women are included in the new Libyan government. After saying that he has six daughters, Mr. al-Magariaf said, “We’ll take whatever measures needed and necessary to empower women, in every way, in every direction, in every sector of our life, starting with the committee which will draft the constitution. There will be women there, and the constitution has to address the rights of women. This is my belief, and I will work very hard for it.”

The event was moderated by Warren Hoge, Senior Adviser for External Relations at IPI.