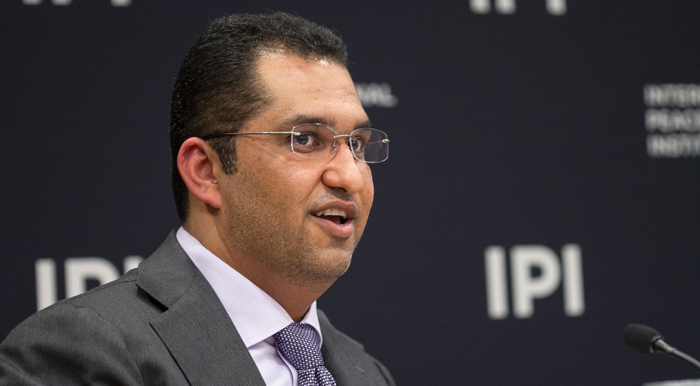 “Oil and gas alone will not be the sources of energy that will meet our global energy requirements moving forward,” said Sultan Ahmed Al Jaber on September 27, 2012. “In my view, renewable energy is a platform that will ensure prosperity and peace in the future.”

Dr. Al Jaber, who is the UAE Special Envoy for Energy & Climate Change and the CEO of Masdar, spoke at an IPI event entitled “Clean and Green: Renewable Energy, Security, and Development.”

At the heart of Dr. Al Jaber’s work is Masdar City, a planned city in Abu Dhabi powered entirely by renewable energy. “All of our power is clean… we practice what we preach from day one,” he explained.

Masdar City features innovations such as driver-less, electric powered public transportation vehicles that, for example, bring students, researchers, and faculty from a parking lot to their destinations. “You won’t find it anywhere else at this scale,” said Dr. Al Jaber.

He added, “That’s why I refer to Masdar City as the living laboratory… Technologies are being piloted, deployed, demonstrated, and commercialized.” According to Dr. Al Jaber, the problem is not a lack of existing green technologies, but the fragmentation of those technologies, which are often deployed separately, in silos, and not in integrated ways.

“We know that oil and gas will continue to play an important role, yet we know that oil and gas resources are depleting. We know that renewable energy today is not as mature as we want it to be, yet it’s mature enough, given that we take what we have today and put a roadmap of how we want to scale it up and mature it to a point where it can seriously complement and supplement conventional sources of power,” he said.

Dr. Al Jaber also described the UAE’s strategic plan for energy, as part of its politics and economy. He said, “The UAE today possesses the fifth largest oil reserve in the world, with 98 billion barrels of reserves, and the seventh largest gas reserves, with around 213 trillion feet of gas reserves.” In terms of sustainable energy, he added, Masdar itself owns 12 percent of the world’s solar shares.

Dr. Al Jaber explained that energy is very much linked to security and peace; in history, security comes with meeting global requirements. He said, “Energy is the spinal cord of any economy in the world.”

Dr. Al Jaber argued that the best way to push forward renewable energy is to embrace cheap prices of conventional sources, such as oil and gas, and combine it with more expensive sustainable energy resources so that the average unit of energy stays affordable. This strategy, he said, affords sustainable energy technologies to evolve.

Dr. Al Jaber commended the steps UN Secretary General Ban Ki-moon took on sustainable energy to bridge public and private efforts. He said, “This past January in Abu Dhabi, [Ban Ki-moon] launched the Sustainable Energy for All initiative, which has been a great success for all the participants in terms of what frameworks came out of it.”

When asked about the energy challenges facing the US, Dr. Al Jaber pointed out that the US already has the ecosystem, institutions, and frameworks in place to advance sustainable resources. “It’s just a matter of good will, real commitment, dedication, and focus,” he said.

Dr. Al Jaber also expressed interest in the potential for sustainable energy industries in Africa. He said, given the right regulatory framework and policy, “I don’t see why any investor wouldn’t invest in Africa; we would, as Masdar.”

In his closing statements, IPI President Terje Rød-Larsen applauded Dr. Al Jaber’s innovative instincts and vision for the future. “There is a saying, Seeing is Believing,” he said. “I’ve actually been [to Masdar City], and it is science fiction become fact.”