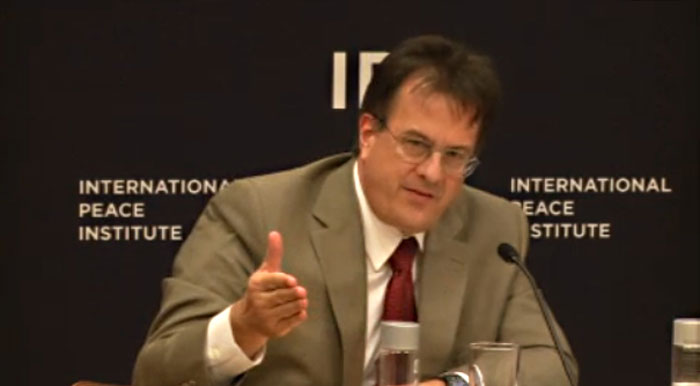 “I know the title of today’s presentation is ‘A Deepening Crisis,’ and in many ways that is true, but on the acute side, we actually have some good news,” said David Gressly, the Regional Humanitarian Coordinator for the Sahel, at an IPI event on October 1, 2012.

The “acute side” Mr. Gressly referred to is one of three simultaneous humanitarian crises affecting the Sahel, along with a chronic food security crisis in the entire region and mass population displacement in northern Mali.

The acute food crisis was triggered by a 2011 drought, which caused a shortfall of food production and a rise of commodity prices across the Sahel. One million children suffered from severe malnutrition as a result. Yet, Mr. Gressly applauded the swift responses of governments of the region and donors to address the issue. By July of 2012, over half of the one million malnourished children were treated. “The prospects for 2013 look reasonably good in terms of harvest,” he added. “We see the trim-line in prices going down.”

However, chronic food insecurity still affects 18.7 million people in the Sahel. The region is also vulnerable to recent flooding from above-average rainfall, as well as to the growing risk of desert locust infestations—all of which is compounded by a volatile security situation in northern Mali and northern Nigeria.

The 2011 drought was the third drought in the Sahel since 2005. The same vulnerable populations suffer from fluctuating food prices and lack of harvest. “These households have been hit repeatedly, and therefore are in a difficult position to recover,” said Mr. Gressly, emphasizing the absolute necessity to strengthen the resilience of populations. “There will be another drought in the Sahel–that, I can tell you. I just can’t tell you which year.”

Mr. Gressly also spoke about the humanitarian implications of the armed takeover by Islamic armed groups that caused the displacement of approximately 450,000 people both within Mali and in neighboring states. “On Mali and its implications, we have some difficult days ahead,” said Mr. Gressly.

He pointed out that a number of humanitarian organizations are present and active in the region, including the International Committee of the Red Cross, the World Food Programme, the United Nations Children’s Fund (UNICEF), and the Algerian Red Crescent. These organizations can work in the region through their Malian staff, since the main obstacle is not active fighting—there were only occasional confrontations at the time of Mr. Gressly’s presentation—but a matter of perception of who delivers aid.

However, warned Mr. Gressly, “If there is a military intervention or other conflicts that emerge in the north, the kind of prospects for what we see happening today, in terms of humanitarian assistance, can turn very rapidly, and we need to be prepared for that change, should that happen.”

Mr. Gressly also emphasized that the humanitarian response to the refugee crisis remains poorly funded, and he warned of possible unintended consequences. For instance, the United Nations Refugee Agency (UNHCR) is only able to provide lifesaving assistance, not educational support, and children are losing over a year of schooling, which makes them more susceptible to join the violent groups that are forming in northern Mali.

Mr. Gressly is hopeful that a strategic, integrated UN approach may address the root causes of the crises. “Humanitarian action really is a consequence or need because of a development failure, or a political failure, or a combination of the two,” he explained, “which is why I’m happy to see an integrated strategy that’s trying to look at those things, to try to deal with the structural issues that we see across the Sahel.”

Mr. Gressly added, “I’d very much like to see the role of humanitarian coordinator made irrelevant, and this is certainly a start in doing that.”

Mr. Gressly, who took his post on April 20, 2012, covers the humanitarian cases in Mauritania, Senegal, Gambia, Mali, Burkina Faso, Niger, Chad, Nigeria and Cameroon. Prior to his current role, Mr. Gressly served as UNICEF’s Regional Director in West and Central Africa. He also spent seven years in Sudan, where he served as Deputy and Resident Coordinator in Southern Sudan. He started his career as a peace corps volunteer in Kenya.