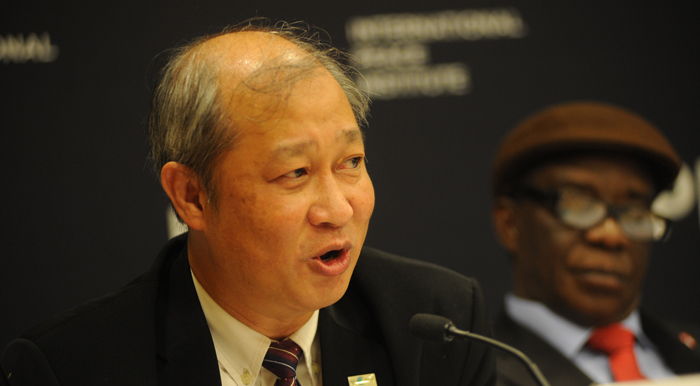 Modern piracy has grown from petty theft to hijacking and kidnapping and ransoming of the crew, and it has also diversified geographically, from attention-getting attacks off the Horn of Africa to large-scale thefts in Southeast Asia and complex operations in the Gulf of Guinea.

“The nature of piracy is always evolving,” explained retired Lieutenant Colonel (Ret.) Nicholas Teo of the Republic of Singapore Navy, and Deputy Director under the Regional Cooperation Agreement on Combating Piracy and Armed Robbery Against Ships in Asia (ReCAAP).

To address the issue, IPI held a workshop on October 10, 2012 entitled “Combating Piracy,” which featured five panelists. The event, co-hosted with the Benin and Australian missions to the United Nations, followed up on a July 2012 Perth counter-piracy conference in Australia that convened over 100 delegates from 59 nations.

During the workshop, Peter Jennings, Executive Director of the Australian Strategic Policy Institute and Chair of the Perth Conference shared 10 highlights he gathered from the July meeting:

“What was interesting and in some respects unique about Perth was the comparative work done to look at the three principle areas of piracy,” said Mr. Jennings. “The causes and the nature of the problem do vary to some extent between regions.”

In Southeast Asia, the global financial crisis has held many ships at anchor and has encouraged the stealing, repainting, and reselling of tugboats, with each tugboat worth over half a million US dollars, said Mr. Jennings.

Multilateral efforts such as the ReCAAP have curtailed seaboard crimes in Southeast Asia. “The key principle we take into consideration in all our programs is respect for national sovereignty,” said Mr. Teo. This way, he explained, each nation can take information and operate accordingly, based on national policies. Senior Captain Jiang Guoping from the Chinese Mission, who was in attendance, later voiced his country’s concerns about respecting national sovereignty.

Alan Cole, Counter-Piracy Programme Coordinator for the UN Office on Drugs and Crime (UNODC) warned that piracy in the Gulf of Guinea in West Africa is rapidly rising. Operations in the region are sophisticated and well-organized, involving the theft of oil and other cargos.

“The lack of political will to invest in maritime assets is a big challenge,” said Major General Charles Okae, Director of Peacekeeping and Regional Security for the Economic Community of West African  States (ECOWAS). “West Africa is the most endowed gulf region of sea assets, but the least developed in the management of those assets.”

The UN Security Council first took action on piracy in West Africa on October 31, 2012 through Resolution 2018, which condemned all acts of piracy and armed robbery in the Gulf of Guinea and encouraged regional organizations to develop strategies to address the issue. The Security Council followed up on the matter through Resolution 2039, adopted unanimously on February 29, 2012, as piracy in West Africa worsened.

In Somalia, the lack of onshore governance and deep economic hardships has allowed pirates to hold ships and their crews for ransom and get support from organized crime. “The fact that Somali pirates can find safe anchorages for their captured vessels sustains this piracy model, which has attracted organized criminal support,” warned Mr. Jennings.

Ambassador Elmi Ahmed Duale of Somalia, who was in attendance, emphasized the strong link between poverty and piracy, and expressed optimism in Somalia’s emerging government’s ability to manage the issues.

A lack of economic opportunity pervades the situation, explained Mr. Cole. There are 1,200 young Somali men held in 21 states around the world who are not full-time pirates, but move between different crimes to make a living.

Mr. Cole also warned about the dangerous commingling of pirates and the al-Shabab insurgency in central Somalia, as a byproduct of the African Union Mission in Somalia’s (AMISOM) efforts that drove the al-Shabab north and counter-piracy efforts in Puntland that drove pirates south.

One of the nations most vulnerable to piracy attacks off the Horn of Africa is the Seychelles, which has a population of 89,000 and a fragile economy dependent on tourism and fisheries. “For an island-state such as Seychelles, piracy can completely isolate us,” warned Barry Faure, Seychelles’ secretary of state.

By September 20, 2012, Seychelles held 103 pirates in its prisons, which made up a quarter of its prison population. As part of its efforts, Seychelles ratified relevant international conventions, signed multilateral and bilateral agreements, and adopted criminal laws. “Seychelles has played a key role in ensuring that impunity associated with piracy has ended,” said Mr. Faure, who added that Seychelles is vying for a nonpermanent seat in the UN Security Council in 2017 in hopes of placing maritime security higher on the international agenda.

To conclude the workshop, Mr. Jennings said, “What you see is the enormously demanding effort, the patient diplomacy, and the gritty detailed work that’s necessary to put together appropriate national, regional, and international strategies to deal with counter-piracy.”