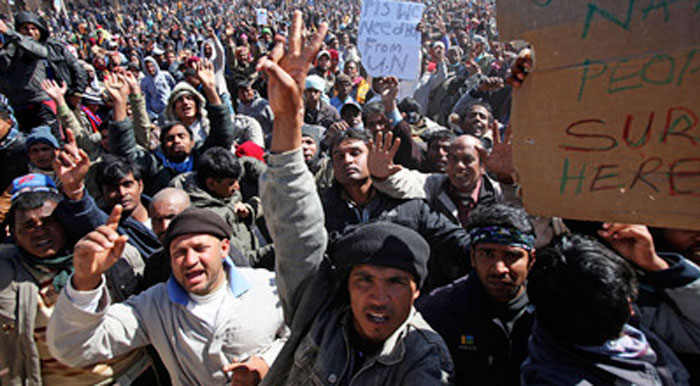 Recent events in Libya and beyond show that policies put in place prior to crises and interagency coordination during crises are crucial to ensuring the protection of migrants in such extreme situations. This was the main takeaway from a roundtable seminar convened by the International Peace Institute and the International Organization for Migration (IOM) on Tuesday, October 9th.

The seminar explored the situation of international migrants caught in crises in their destination countries and the consequences of their subsequent return to their countries of origin. It was part of the International Dialogue on Migration (IDM)—the IOM’s principal forum for informal multistakeholder dialogue on migration policy since 2001.

1. While events in Libya brought the topic of international migrants in times of crisis back to the forefront, the issue is not new. Migrants were affected in crisis situations like the first Gulf War in 1990–1991 and Lebanon in 2006. Although the current situation in Syria is most prominently a refugee crisis, there is an important migrant component. The lessons learned in managing these crises should be used when developing crisis preparedness and response plans.

2. The events in Libya showed that effective coordination among all actors is crucial to a timely and successful response. The cooperation shown between organizations like IOM and the UN Refugee Agency (UNHCR) was a good example of this. Interagency coordination with respect to humanitarian assistance for this often “invisible” group should be seen as contributing to the Inter-Agency Standing Committee’s Transformative Agenda.

3. Likewise, policies put in place prior to crises play a critical role in crisis management. Policies regarding rights of migrants in destination countries directly affect how migrants are treated during crises, or whether they are even considered in national crisis-management strategies.

4. In many cases, repatriation of migrants during crises puts a significant toll on countries of origin. This can be especially problematic in already fragile states.

5. The tension between short-term emergency management and longer-term development challenges remains unresolved, and linkages between the two must be improved. Migration during crises tends to be handled in the context of short-term humanitarian efforts at the expense of long-term stability and sustainability.