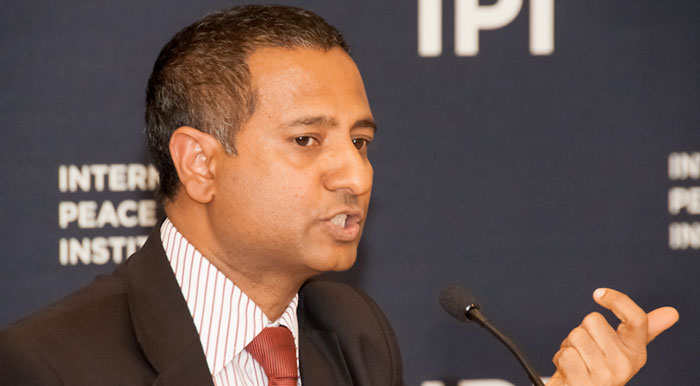 The Universal Declaration of Human Rights respects the rights of all individuals without bias to ethnicity, gender or religion, but Iran has abandoned this compact, explained Ahmed Shaheed, the UN Special Rapporteur on the Human Rights Situation in Iran, at an IPI event on October 22, 2012.

Dr. Shaheed is the author of a 23-page report that documents human rights abuses in Iran. The report was released to the public on October 24, 2012. “Allegations contained in this report paint a disturbing picture of a government that seriously struggles to comply with its international and national obligations,” he said.

Since Iran did not allow him to work inside the country, Dr. Shaheed collected his information through Skype conversations, telephone calls from Iranian prisons, and interviews with the Iranian diaspora.

Dr. Shaheed’s report elicited a 66-page response from Iran that mostly denounced the report’s legitimacy. “Several Iranian government representatives have expressed that the allegations in my reports are ‘baseless’ and ‘out of date,’” he said, while noting that Secretary-General Ban Ki-moon’s report recognized patterns similar to his.

Dr. Shaheed argued that while solutions must come domestically, a lack of engagement from the international community would fuel the situation.

“Iran possesses the basic legal framework and tools to promote respect for human rights,” he said. “The country is a party to five of the nine legally-binding international human rights treaties, and many of the rights guaranteed in these treaties are enshrined in its constitution… Yet, Iran is still considered to be a substantial human rights violator.”

In 2011, Dr. Shaheed documented 670 cases of human rights abuses in Iran. There are fewer cases this year, he said, but that may be due to lack of information.

His newest report focuses on two main issues: rule of law deficits, including fair trials and draconian sentences; and discrimination based on gender, ethnicity, and religion. The report included examples of stoning, torture, and juvenile executions.

Dr. Shaheed presented to IPI’s audience the particular plights of Baha’is, journalists, and women in Iran.

“The Baha’is, being [part of] an unrecognized religion, perhaps suffer the worst,” said Dr. Shaheed.

Journalists in Iran suffer similar harassment. According to Dr. Shaheed, families of journalists, such as those working for BBC Persian, are threatened.

New laws, such as the cyber crimes law and the cyber café law, further inhibit free speech. “There is a declining space for media freedom in the country,” he said.

Dr. Shaheed also shared rumors of an Iranian domestic Internet, referred to as Halal Net, which would remove Iran from the World Wide Web. “People [would be] in a cocoon of national making,” he warned.

Despite the grim report, Dr. Shaheed did share some good news: around 100 Iranian prisoners were recently pardoned, including Youcef Nadarkhani, an Iranian Christian pastor who was once sentenced to death by the Supreme Court for refusing to recant his faith.

Dr. Shaheed hoped to use his training as a diplomat to promote human rights in Iran by working with more member-state delegations. “I believe there is space for human rights diplomacy, and I believe that in Iran’s case, that’s a useful tool,” he said.

Mr. Nadarkhani was freed, he notes, “after intense lobbying from the international community.”

However, international focus on non-proliferation, as well as internationally imposed sanctions, take away space for the international community to address Iran’s human rights issues, he warned.

For his next report, Dr. Shaheed intends to focus on the status of women in Iran.

“[Iran] doesn’t have the framework to uphold women’s rights,” he explained, citing an outright ban of women students from universities and a 15 percent women workforce participation rate.