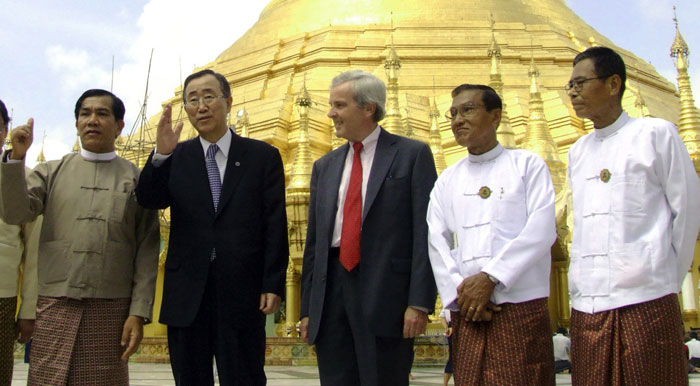 The UN Secretary-General’s good offices on Myanmar, now in their twentieth year, have been one of the longest such diplomatic efforts in the history of the organization. With Myanmar now in the midst of major political, economic, and social reforms, and questions invariably being raised about the future of those “offices,” it is an opportune time to revisit the history and achievements of the past twenty years of mediation efforts.

This 100+-page report tells the story of UN mediation efforts in Myanmar through the lens of four special envoys: Alvaro de Soto, Razali Ismail, Ibrahim Gambari, and Vijay Nambiar. It examines the various strategies and achievements over the past 20 years and provides lessons for Myanmar and, more broadly, for the Secretary-General’s good offices in other regions of the world.

The report argues that the conditions for success or failure lie in the readiness of the parties for conflict resolution, the scope of the mandate, the clarity of objectives, the impartiality of the mediator, and the presence or absence of strong leadership from the Secretary-General himself.

Anna Magnusson is an independent analyst who has been researching developments in Myanmar for the past ten years. She has held many posts including in the UN Secretariat and as a political officer in the Department of Political Affairs, and with the UN Mission in Nepal.

Morten B. Pedersen is senior lecturer in international and political studies at the University of New South Wales/Canberra (Australian Defence Force Academy) and a former senior analyst for the International Crisis Group. He has spent seven of the last fifteen years in Myanmar, and has worked at different times as a policy adviser on Myanmar politics and development affairs for the United Nations, the World Bank, the European Commission, the Australian government, and Nobel Peace Prize laureate Martti Ahtisaari.