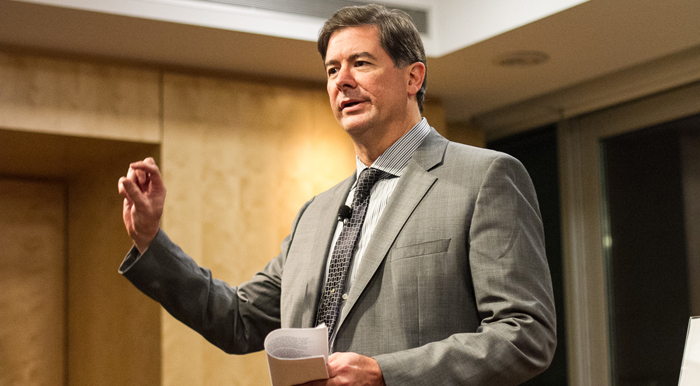 Tyrants and dictators who cling to power during their downfall perceive a different world than the rest of us, explained David Lesch, Professor of Middle East History at Trinity University, at an IPI event on November 15, 2012. “They don’t see the house coming down. They believe in their destiny and righteousness… They may never see it until the bullet goes into their head.”

Though Bashar al-Assad is still in power, “The House of Assad has fallen in a personal way, because he did not fulfill a tremendous promise that many people had, including myself, in him,” Mr. Lesch said.

Mr. Lesch is the author of Syria: The Fall of the House of Assad (2012). What makes Mr. Lesch’s perspective unique is that, during his many visits to Syria, Mr. Lesch developed a close relationship with Bashar al-Assad, the Syrian President.

In November 2007, on a visit in which he was scheduled to see President Assad, Mr. Lesch discovered at the airport that he had been blacklisted. Security guards took him into a room with no windows. A Syrian colonel twirled a gun in front of him for intimidation. “I was Syria’s friend,” said Mr. Lesch. “I hate to think what they do to Syria’s enemies.”

Bashar al-Assad came into power in 2000 after the death of his father, Hafez al-Assad, a cunning and ruthless leader most famous for massacring up to 20,000 of his own people. “The whole raison d’etre for the Assads, both father and son, for ruling Syria was to provide stability, especially after many decades of instability,” said Mr. Lesch.

In his first meeting with Bashar al-Assad in May 2004, Mr. Lesch asked the Syrian president about his affinity for Phil Collins, the British rock & roll musician. “He gave me this strange look,” said Mr. Lesch. “I could see behind his eyes him thinking to himself, ‘This is the guy we gave access to? He’s asking me these stupid questions.’”

But what Mr. Lesch was getting at was that Bashar al-Assad’s cultural tastes fed into an emerging international profile at the time of the new Syrian leader as a pro-West, modernizing reformer.

“He was different. He didn’t reek of eccentricity or evil that leaks beneath the surface,” said Mr. Lesch.

But the Syrian system breeds a paranoiac attitude towards the outside world, largely because real threats have historically loomed around the corner, explained Mr. Lesch. The system is not geared to respond to people’s demands, it is geared to control people and shape their demands. “It is geared to maintain the status quo and survive,” he said.

Mr. Lesch added, “He unleashed his forces on his own population, and at the end of the day reminded many Syrians that he was much more like his father than many had hoped he would be.”

When Bashar al-Assad came into power, he wanted to erode the cult of personality that was constructed around his father. He wanted to be seen as a regular guy, to go out in public without body guards, to drive his own car. Many Syrians claimed to have seen him eating at their local restaurants, said Mr. Lesch.

But Bashar al-Assad was surrounded by sycophants–cabinet and Ba’ath party leaders who worshiped him as a prophet and savior of the country. They created an alternative reality and orchestrated this alternate reality, explained Mr. Lesch.

When the Arab Spring broke out in Tunisia, Libya, and Egypt, Bashar al-Assad believed Syria to be immune to such revolts. Media mouthpieces for the regime actually supported the protestors. “I can guarantee you that Bashar was absolutely shocked when the uprisings seeped into Syria in March of 2011,” said Mr. Lesch.

When Mr. Lesch saw Bashar al-Assad after the 2007 referendum–a 97 percent victory that was largely shaped and corrupted by Bashar al-Assad’s supporters–the Syrian leader had changed. “He had drunk the ‘Kool-Aid’ of power, and he was going to be president for life,” said Mr. Lesch.

Bashar al-Assad set out to change the system, but at the end, the system changed him, Mr. Lesch added.

Outside of Bashar al-Assad’s bubble, most Syrians see few alternatives and a bleak future, according to Mr. Lesch.

The conflicts in Syria are layered, he explained. There is a civil war, there are regional powers with diverging interests in Syria, and there are international influences and proxy wars, such as between Iran and Saudi Arabia.

While many in the international community see Russia as the key to resolving the crisis, Mr. Lesch believed that Russia is powerless over Bashar al-Assad. Mr. Lesch argued that Iranians are the only ones that are capable of convincing Bashar al-Assad to step down, and Iran would only consider doing so if their own interests are secure in Syria after its fall.

Mr. Lesch predicted three possible scenarios: the “Lebanonization” of Syria, where Syria breaks apart into fiefdoms controlled by different factions of the opposition, much like Lebanon in the 1980s and early 1990s; heightened military support from the international community; or a “knockout punch” by the Syrian government against the opposition. Mr. Lesch saw the possibility for a negotiated settlement as highly unlikely.

In his mind’s eye, Bashar has not fallen at all. He is protecting the country, said Mr. Lesch.

“They still think they can win,” he warned.