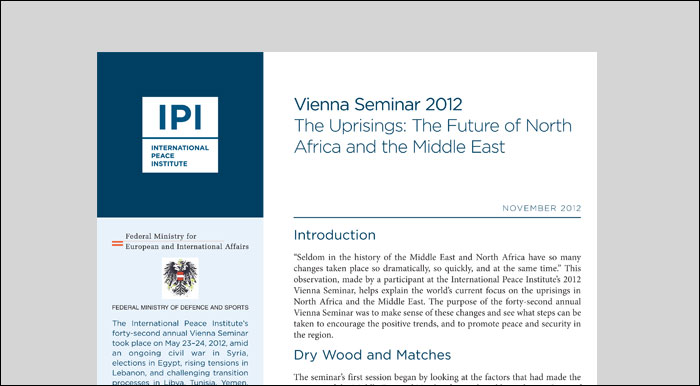 “The challenge for us all is to ensure that the spark of revolution ignites a beacon of hope and not a wildfire of despair,” said IPI President Terje Rød-Larsen at IPI’s 2012 Vienna Seminar.

IPI’s 42nd annual Vienna Seminar took place on May 23–24, 2012, amid an ongoing civil war in Syria, elections in Egypt, rising tensions in Lebanon, and challenging transition processes in Libya, Tunisia, Yemen, and beyond.

“One year ago, the energy of the people was focused on removing the old regimes. But now the task is much harder: to create an alternative,” one participant observed.

Among the challenges now faced in the transition process are economic hardships (in particular, high unemployment), security-sector reform, and rebuilding state institutions riddled by corruption and nepotism. All of this is proving to be difficult. Several of the countries that were at the heart of the uprisings are even experiencing negative growth—creating a situation where there is more freedom but fewer jobs. This begs the question, has the revolution, which inspired such high expectations, failed? Has anything really changed for the better?