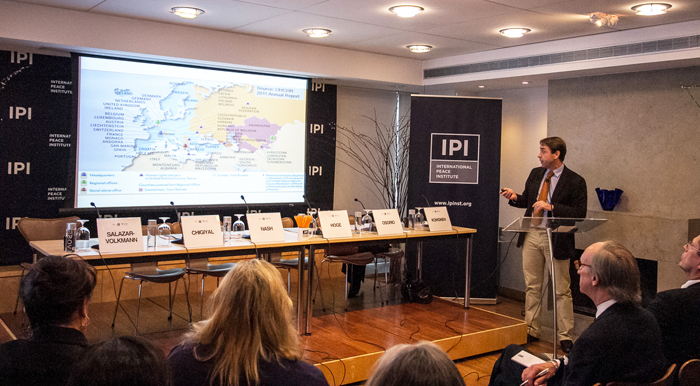 Roger Nash spent two years in 11 countries gathering over 400 interviews for a book-length report that examines the work and influence of the UN’s Human Rights presence on the ground. He presented his report at an IPI event entitled “Making Human Rights Real” on November 7, 2012.

“The work that happens in the field is not very well understood. There’s still a stereotype of human rights as something that’s inherently controversial,” said Mr. Nash. “It’s not about people in the field simply gathering data and sending that to headquarters and broadcasting that information… these elements are threads of a much greater span of activity.”

While the UN’s public voice may have direct influence in discouraging human rights abuses, it also has a “multiplied influence,” explained Mr. Nash. It allows other actors, including civil society and government officials to safely speak out. “If the UN says something, suddenly the civil society activists can say the same thing, and it’s not as dangerous,” he said.

However, the UN’s best human rights work, argued Mr. Nash, was based on “objective intake,” on setting goals and using tools to achieve those goals.

Mr. Nash gave the example of a mobile court system in the Democratic Republic of the Congo, in which UN helicopters brought judges and lawyers to try cases in remote areas. “This has an enormous effect in terms of demonstrating to those people that there actually is accountability for breaches of human rights,“ he said.

Panelist Maarit Kohonen Sheriff, Deputy Head of the New York Office of the Office of the High Commissioner for Human Rights (OHCHR) gave another example of mobile justice, in northeastern Uganda, where a UN field office regularly transported a local judge to a remote prison because he didn’t have a car. The judge held open court sessions every week for a year, and ultimately reduced the prison population by 30 percent.

Ms. Kohonen explained that these field offices turn OHCHR’s work in Geneva into a reality. “It’s not about field versus headquarters or anything,” she said. “It’s about how to combine the two to make a difference.”

The event in New York at which Mr. Nash spoke was co-hosted by the Permanent Mission of Sweden to the UN and the Office of the High Commissioner on Human Rights (OHCHR). Frank Belfrage, the State Secretary for Foreign Affairs in Sweden, and Ivan Šimonović, the UN Assistant Secretary-General for Human Rights, gave welcoming remarks.

Mr. Šimonović shared two stories from his experience in human rights work. One was from a young police general in the Democratic Republic of the Congo who hoped that his police staff would be cheered and greeted on the street, and not feared and hated. The other was from an Iraqi official: “He was very frank, he was very old… he said, ‘Listen, I was raised in a different spirit… I cannot understand this concept of human rights, but I understand enough that I want it for my grandchildren.’”

Ms. Chigiyal, whose country’s population of 102,000 is dispersed across an array of islands, emphasized the need to mainstream human rights concepts into Micronesia’s national agenda and legislation. “We need to have people who are versed in human rights and its processes,” she said.

Mr. Osorio applauded the 35-year partnership between OHCHR and Colombia, who worked together to address extrajudicial executions, the rights of indigenous people, transitional justice, and the rights of the child.

Christian Salazar-Volkmann, Director of UNICEF’s Programme Division, applauded Colombia’s progress in human rights, and identified OHCHR’s presence as a trigger for national action. Between 2004 and 2008, he said, the Colombian military killed over 3,000 civilians, dressing many of them up as guerillas to present them as killed in combat; that number has been reduced massively since 2009. “An environment is created through these alliances for change to happen,” he said.