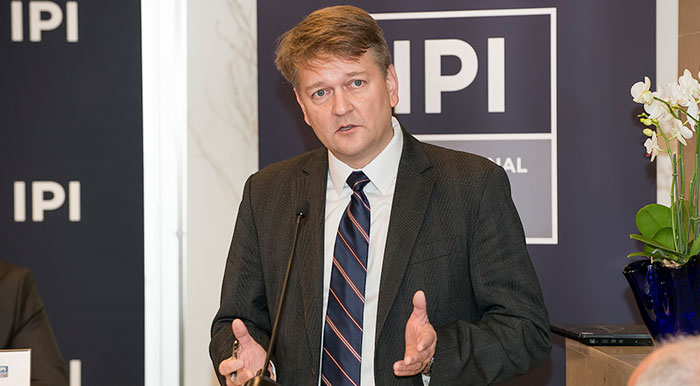 “Recent positive trends are fragile and reversible,” said Jon Huggins, Director of Oceans Beyond Piracy, on December 10, 2012, at an event entitled “A Sustainable Solution to Somali Piracy.”

Mr. Huggins explained, “Even though the number of hostages are down and you see less about it in the news, the human cost is still too high. I think it’s still a very important issue and probably the most important issue having to do with piracy.” He went on to mention that “the crime of piracy is still not documented at the same level as a violent crime on land,” and highlighted some of the disturbing trends in treatment that hostages face.

The two-part panel discussion also included Pierre St. Hilaire, Head of INTERPOL Counter Piracy Program, who reaffirmed the sentiments. “At the end of the day, it’s all about the hostages,” he said. “ When we are talking about the vessel cargo, all of that can be dealt with effectively. But what happens to the human beings behind the flag states, behind the vessels? How do we deal with the plight of the seafarers?” Mr. St. Hilaire reflected on rule of law on the high seas, explaining the long-term outlooks in oversight for privately contracted armed security personnel and their responsibility at sea.

Addressing the humanitarian aspects of assisting seafarers and their families affected by piracy, Peter Swift, Director of the Maritime Piracy Humanitarian Response Program (MPHRP), said that families of kidnapped seafarers are often “left in the dark.” Talking about MPHRP, Mr. Swift referred to its recent launch of a piracy awareness training program and discussed the interim guidelines for stakeholders on measures to provide welfare to seafarers and their families.

Chirag Bahri, Regional Director of MPHRP-India, was a crewmember of the Marida Marguerite, which was held captive for seven months and twenty days by Somali pirates in 2010. Providing a personal narrative of his time as a hostage, Mr. Bahri explained that during captivity, there is no authority on board and that often times the hostages endure physical abuse and stress. The loss of contact with the seafarers also places stress on the families of the hostages who live with the uncertainty and keep themselves isolated from the world.

Explaining ways to move forward after such a traumatic incident, Mr. Bahri listed providing psychological consultations, medical treatments, financial compensation, and reassurance of jobs as some of the ways to help seafarers.

In addition, Mr. Bahri mentioned the need to encourage a rapid return to the rule of law and order and the international community’s support for capacity building in Somalia.

John Steed, Chief of Counter Piracy and Maritime Security at the United Nations Political Office in Somalia, described the prospects for stabilization ashore, believing the window of opportunity is currently in place because of the new, progressive administration in Somalia. With tactical gains on the ground, Mr. Steed said, “The new government really understands that the maritime environment is potentially one of the key resources for the state to recover from 20 years of civil war.”

He went on to say that maritime law enforcement helps in capacity building, using the sea as an environment to maneuver against these pockets of instability.

The discussion was hosted in partnership with the Permanent Mission of India to the UN. Ambassador Hardeep Singh Puri of India and Warren Hoge, IPI Senior Adviser for External Relations, gave welcoming remarks.

Interview with Jon Huggins, Director of Oceans Beyond Piracy