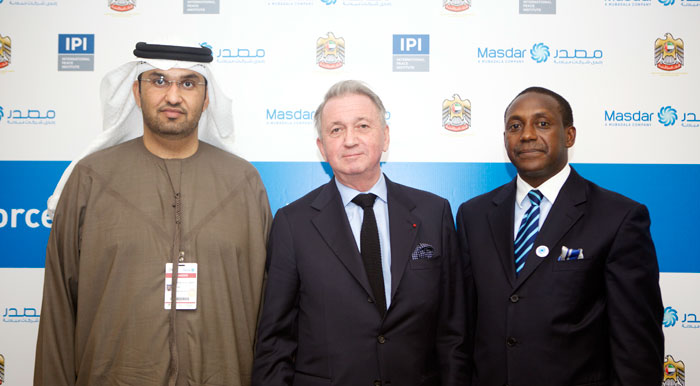 A new task force to focus on the impact of energy on security and to examine ways of forestalling energy-related conflict was launched on January 16th at the annual World Future Energy Summit by the International Peace Institute and Masdar, a leading renewable energy company based in Abu Dhabi.

The purpose of the task force is to examine the linkage between energy and security and to strengthen multilateral mechanisms to promote cooperation and to prevent and defuse energy-related conflict. This builds on previous IPI task forces (from 2008 and 2009) on strengthening international peace and security institutions which resulted in a series of recommendations known as IPI Blue Papers.

“Energy should be a motor for development and cooperation, not a source of conflict,” said Terje Rød-Larsen, the president of IPI. He cited tensions in northern Iraq, southern Sudan, the Niger Delta and the east Mediterranean as examples of how competition for energy resources can cause instability.

Dr. Sultan Al Jaber, CEO of Masdar, said: “With energy demand predicted to grow nearly fifty percent over the next twenty years, competition for resources will increase. Energy is therefore becoming a key piece of the global security puzzle. Any significant move to solve the energy crisis is also a step towards creating peace and stability among the nations of the world.”

The task force will examine current multilateral mechanisms to prevent and defuse energy-related crises. It will review what lessons have been learned from past experience and what confidence-building measures have been successful. It will look at the role of the private sector in promoting energy cooperation, and it will focus on a number of regions that are vulnerable to energy-related conflicts. Special attention will be given to regions such as the Arctic, Central Asia, the Caucasus and the Caspian, the Mediterranean, the Middle East and North Africa as well as West Africa.

“Our aim is to bring together the brightest minds in the fields of energy and security in order to promote evidence-based policies that can reduce tensions,” said Mr. Rød-Larsen. “This topic can only be addressed properly by involving experts from the private sector, the governments, and the research community,” said Dr. Al Jaber.

The task force secretariat will be based in Vienna, Austria, where IPI has an office. Vienna is a key hub for energy security including the headquarters of the International Atomic Energy Agency (IAEA), the Organization of the Petroleum Exporting Countries (OPEC), the United Nations Industrial Development Organization (UNIDO), and the new office of the Special Representative of the UN Secretary-General for Sustainable Energy for All (SE4All) Mr. Kandeh Yumkella.

In his keynote address at the launch, Mr. Yumkella, in his function as Director-General of UNIDO, highlighted the important linkages between energy, development, and security and the important contribution of the three goals of the SE4All initiative in this regard.

“With Masdar’s links to the government of the United Arab Emirates, to the United Nations and other multilateral organizations, its respected role among the network of leading energy companies around the world, as well as its research campus in Masdar City, the company is well-positioned to play a leading role in this task force,” said Mr. Rød-Larsen. “I commend the United Arab Emirates, Foreign Minister Sheikh Abdullah bin Zayed Al Nahyan, Masdar, and Dr. Al Jaber personally for taking the initiative, and I encourage others to join us, as donors, participants, and experts,” he said.

IPI is now in the process of finalizing the composition of the task force, and will begin its research including the first regional case.

For more information on the task force on energy and security please contact Marc Baltes at baltes [at] ipinst.org.