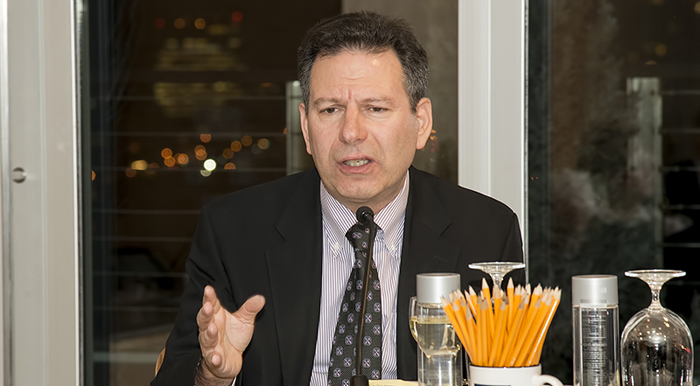 The Revenge of Geography is the title of a book showcased in a Beyond the Headlines event featuring its author, Robert D. Kaplan, held at IPI on Thursday evening, January 24th.

Illustrating how natural facts and timeless truths can help prevent this century’s looming cataclysms, the book traces the history of the world’s hot spots by examining their climates, topographies, and proximities to other embattled lands, applying the lessons learned to the present crises in Europe, Russia, China, the Indian Subcontinent, Turkey, Iran, and the Arab Middle East. The result is a holistic interpretation of the next cycle of conflict throughout Eurasia and a stimulating rebuttal to thinkers who suggest that globalization will trump geography.

At the discussion, Mr. Kaplan sketched out several examples from his book:

Emphasizing the importance of river systems in geography, Mr. Kaplan pointed out that in contrast to the river systems in Russia that run north to south, essentially separating the country, the rivers in the U.S., such as the Ohio, Mississippi and especially the Missouri, run in an east-west fashion and unite the country.

“The continental United States has more miles of navigable inland water-way than the rest of the world combined, and it’s that fact which really enabled Manifest Destiny and Westernization, specifically in the 19th century,” he said.

In another example, Mr. Kaplan posed a question and answer. “Why is Africa so poor ultimately?” he asked. “What is one reason? I would say geography. Africa has a vast coastline but very few deepwater ports, which enable trade. Africa lies astride the equator to a greater degree than any other continent, leading to a hot tropical climate and then to disease, which hinders economic development.”

Illustrating the impact of geography on the Arab awakening, Mr. Kaplan said that Tunisia, where the Arab Spring began, is a country that is not divided by mountains and benefits geographically to its closeness to the Roman world. Having a strong state identity and real institutions, Mr. Kaplan argued that Tunisia’s problem was always political, as the state was never in question.

The same logic also applied to Egypt and the Nile Valley, which has been an age old cluster of civilization going back several millenniums. During the revolution, the structure of the state held while the problem was political. Both Egypt and Tunisia were established states in the first place that enabled an identity without undue repression.

Mr. Kaplan explained that in the case of Libya and Syria, however, the problem was whether there was a state to begin with. Without strong bureaucratic and institutional influences, both countries required higher forms of repression in order to enable a state identity.

Another example was Yemen, which also never had a strong unitary state tradition because it was ruled by several ancient kingdoms and various tribal militias. Geographically, it is also divided by mountains with a rugged interior terrain.

However, Mr. Kaplan believed that the two strongest states in the Middle East region are non-Arab: Turkey and Iran. With high literacy rates, a large population, and rich natural resources, Turkey and Iran are real states because of geography.

Iran, with its great Persian civilization held by the fortress of the Iranian plateau, is also rich with oil reserves. Mr. Kaplan believed that the U.S. will eventually have to go into a negotiation with Iran more so than with Saudi Arabia.

Taking the example of Russia, Mr. Kaplan said that the current President, Vladimir Putin, looks at the world geographically. As he noted, Putin is trying to use Russia’s vast resources of natural gas to make Eastern Europe dependent on the country. He’s attempting to rebuild the buffer zone in what used to be the former Warsaw Pact, trying to re-create a larger sphere of Russian influence in the region.

In regards to China, Mr. Kaplan noted that Russia and China are rivals. Geographically, China, like Japan, is blessed to live in the temperate zone and holds a large population. He believed that demographically and in a corporate sense, China is trying to take back the Russian Far East, which had been part of China up until 1860. It’s building roads, railways, and natural gas and oil pipelines.

But with many different ethnic groups and different plateaus, China also has a geographical dilemma. With the influence of the world media, Tibet will still be an issue for China for many years to come.

As Mr. Kaplan put it, “Freedom does not just unleash individual identities. It unleashes the power of individuals to associate with an ethnic or sectarian group.”

America’s geographic challenge is with Mexico to the South, he asserted. Northern Mexico’s population has doubled since NAFTA in 1995 and Mexico has a younger population than the U.S. As the 12th largest economy in the world, Mexico is also an economic power although drug gangs remain a major challenge for the country.

“Geography dictates that Mexico is as crucial to the future of the United States as anything that will happen in China or greater Middle East,” he said. Mexico is becoming more important as Latin culture is moving north.

In the end, Mr. Kaplan noted that while technology is closing distances, it only makes geography even more claustrophobic and precious than before.

“It makes every place strategic because every place is interrelated now,” he said. “Every place matters and to study the interconnections you have to look at a map more now than you ever did before.”