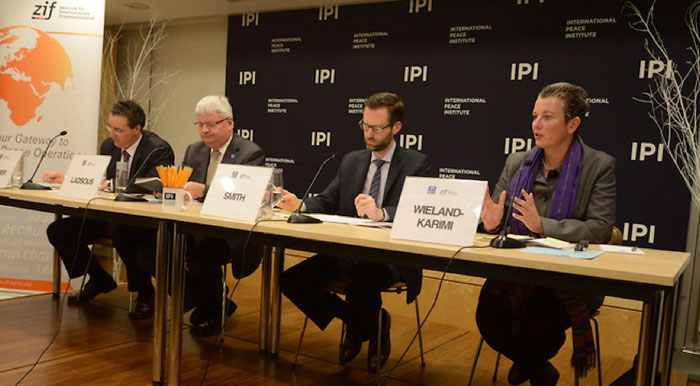 “Challenges to peace and security have become far more diverse and multidimensional than most actors within the UN system or other relevant institutions would have thought not long ago,” said Ambassador Miguel Berger of Germany at the New York launch of Peace Operations 2025 at IPI on February 19, 2013. The event was co-hosted by the German Center for International Peace Operations (ZIF).

“Although one might argue that within the next twelve years, nothing fundamental is going to change, we have seen shifts of paradigms within far shorter periods of time,” he remarked.

Mr. Berger, the Deputy Permanent Representative of Germany to the UN, provided his thoughts on peacekeeping and the importance of the book in thinking about the future of the field.

“Peacekeeping has, since the first observer mission in 1948, developed into the flagship activity of the United Nations,” he said. “However, peacekeeping has undergone, as we know, a number of substantial changes. This applies to both the threats being posed to international peace and security and the way these threats are being addressed through the UN.”

“One thing is clear, the peacekeeping system will face new challenges in a rapidly changing world and the UN will have to adapt to them in order to fulfill the mandates,” Mr. Berger said, suggesting that in order to live up to these challenges, peacekeeping should create and maintain structural and operational flexibility.

In concluding, he remarked that most countries that contribute troops to peacekeeping operations are still in their own development phase, while many industrialized countries face serious economic constraints in their defense budgets. He recommended that the international community should strive for more inclusive and regionally balanced efforts in peacekeeping.

Dr. Almut Wieland-Karimi, director of ZIF, also provided her remarks on the new publication and what it aims to do.

“Scenarios are not predictions or forecasts but rather they provide a tool for strategic planning. We have developed these scenarios in order to provide impulses for dialogue inside this peace operations community,” she said.

She pointed out that understanding what peacekeeping operations need to do today will allow them to have desirable outcomes and avoid an undesirable future, advising them to be proactive and act in a preventive manner.

She discussed the four scenarios presented in the book–national interests, erratic progress, regional diversity and global cooperation–and expanded on the twelve key factors, in addition to the two known factors, that were applied.

As she explained, the direction of the two known, “given” factors–demographics and climate change–is fairly clear, as much has been written on how these two megatrends will unfold within the coming decades. Some of the estimates are that by 2025, the world population will probably be around eight billion, while several hundred million will be “climate refugees.”

Dr. Wieland-Karimi went on to list the twelve key factors, which were identified by participants of ZIF’s “Peace Operations 2025” project. They were: the state of the global economy, national interest versus global interdependence, the evolution of international and regional organizations, economic and political power shifts, the evolutions of norms and values, state fragility, organized crime, resource scarcity, the cluster of migration, refugees, and diasporas, new technologies, new media, and finally, private security companies.

Offering his experiences and thoughts on what UN peacekeeping is facing now was Mr. Hervé Ladsous, Under-Secretary-General for Peacekeeping Operations.

“Whatever happens, UN peacekeeping will still be there, because let’s face it, not only has it had its successes but also, I think, it represents a matter for large consensus within the international community [that] it is also good value for money,” he said.

Mr. Ladsous added that although UN peacekeeping operations were undergoing consolidations in some of their missions such as Darfur, Liberia and Haiti, they are facing a broadening situation in Mali, specifically in the Sahel, Somalia, and possibly in Syria, assuming there will be a political breakthrough.

This, he believed, shows a number of new parameters in peacekeeping operations. “One is that we are increasingly going into environments which have nothing to do with old time peacekeeping, environments in which there was simply a situation to monitor or observe,” he said.

“Now we are increasingly in high-risk situations and I think the best illustration was given last year when we deployed, briefly, the UN observer mission in Syria, ostensibly to monitor a ceasefire, but in fact a ceasefire which never really existed,” he said. He added that it was a miracle they did not sustain causalities, although their twelve armored vehicles were completely destroyed.

Mr. Ladsous pointed out that the situation in Mali is also not going to be permissive, as recent days have shown the perspective of an asymmetric environment in which insurgents carry on surprise attacks.

“Increasingly we face what I call the transverse threats. And certainly again, the situation in Mali is a proof of that. We face, amongst other things, extremism, terrorism, but also international crime and drugs,” he said.

“We have to be more than ever, adaptive [and] creative,” he added. “Certainly there are many unknowns, especially over the next 15 years.”

The event was chaired by Adam Smith, Research Fellow and Manager of the Peace Operations program at IPI.