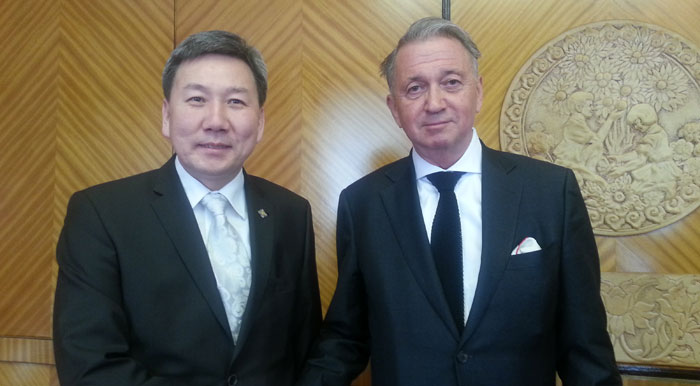 On February 4th-5th, a delegation from the International Peace Institute (IPI) visited Ulaanbaatar for consultations on possible cooperation between IPI and Mongolia. The delegation, led by IPI President Terje Rød-Larsen and also comprising Walter Kemp, IPI Director for Europe and Central Asia, and Andrea Pfanzelter, Director of the IPI Vienna Office, had a number of meetings with senior officials including Foreign Minister Luvsanvandan Bold and the National Security and Foreign Policy Advisor to the President, Lundeg Purevsuren.

Mr. Rød-Larsen also spoke at the Mongolian Institute for Strategic Studies on the topic, “Two Years After the Arab Spring: Has Anything Changed?”

As a land-locked country neighboring China and the Russian Federation, Mongolia is pursuing a “third neighbor” policy in order to strengthen its partnerships and raise its profile in the international community. This includes more actively engaging with multilateral organizations like the United Nations and the Organization for Security and Cooperation in Europe (OSCE) which Mongolia has recently joined.

Exploratory talks were held on how IPI can assist Mongolia to achieve its foreign policy objectives, and what steps can be taken to promote the prevention and settlement of conflicts, particularly in Eurasia.

The government is promoting democracy at home and in the region, for example through the Asian Partnership Initiative for Democracy–which the Presidents of Mongolia and the Republic of Korea launched in August 2011–and as chair of the Community of Democracies (CD). The Foreign Ministry has asked IPI for support in hosting the CD ministerial meeting that will take place in Ulaanbaatar on April 29th. Views were exchanged on how to strengthen regional and international institutions promoting democracy, peace, and stability.

The issue of sustainable development was discussed in the context of how Mongolia’s rich resources (particularly minerals and metals) can be exploited in a way that is a blessing rather than a curse.

“Mongolia is a country with a rich history and a bright future,” said Mr. Rød-Larsen. “There are plenty of challenges, but also great opportunities.”