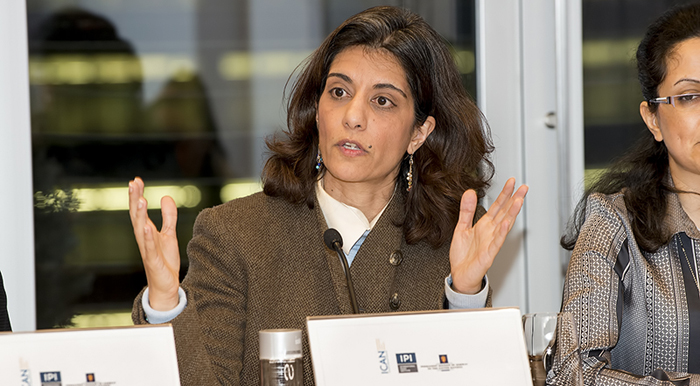 “I am very concerned that we’re still at the point where we somehow don’t understand that when half the population is being threatened, this is really a threat to peace and security,” said Sanam Naraghi Anderlini, Co-Founder of the International Civil Society Action Network (ICAN) at IPI’s Women, Peace & Security Series event on March 7, 2013. Entitled, “Vision and Voice: What the Women Say,” the event was co-hosted with ICAN and the Mission of Norway to the UN.

“The nexus between what’s happening between women and women’s rights and the peace, security and democracy agenda are totally interwoven together,” Ms. Anderlini said.

As the 57th Commission on the Status of Women convened on the elimination of violence against women and girls, panelists at IPI discussed pervasive gender-based violence during a time of major political transitions and shared a constructive, pragmatic, and inclusive vision of the future.

Ms. Anderlini, who was among the civil society drafters of Resolution 1325, reported the issues that were voiced at the forum and the key findings. She said that the version of Islam being brought into countries like Tunisia and Egypt, mainly extremist views from the Salafist sect, is alien to the people. She mentioned that Tunisian participants were questioning who these Salafists were and why they weren’t on the streets during the uprisings.

She argued that these extremists are falsely trying to portray the narrative of women’s rights as a Western concept. “If you look at Egypt, there was a women’s rights movement from the 1800s; in Tunisia as well,” she said. “So you have this history that exists and then this erasure that’s coming, which is extraordinary.”

“The whole rationale and raison d’etre for the women, peace, and security agenda that we now have, Resolution 1325 and all the rest of it, was that women have been saying, ‘We have something to say, we have a right to be there, these peace and security discussions matter to us,’ and we see the interconnectedness,” she said.

But as Ms. Anderlini pointed out, at the international level, they’re seeing a dichotomy between countries saying they support women’s right but then imposing sanctions, like in Iran, that are directly hurting women and women’s right and promoting the abuse of human rights on a massive scale.

Rita Sabat, Assistant Professor at Notre Dame University, discussed the challenges that Lebanon faces today in relation to gender-based violence, highlighting the link between gender inequality and state and international insecurity and instability.

“There’s an existence and growth in gender-based violence, whether structural or direct, and it’s at the heart and future of stability and instability,” she said.

As Ms. Sabat noted, in Lebanon, the Minister of Social Affairs, along with civil society and NGOs have paved the way in discussing gender based violence, but the link between the progress and state security is missing. In order to counteract that, she asserted that enforcement and the introduction of new laws that can support the grass-roots base can help.

“It’s known that inequality feeds violence,” she said. “The link to state security or insecurity becomes more apparent once you start to see the spaces that allow for discrimination between individuals that turn violent in one way or another, and this cannot be ignored by the international community.”

She proposed that the international community and member states highlight the inclusion of women, peace, and security as a foreign policy objective.

Parisa Kakaee, a women and children’s rights activist from Iran, offered her insights on the situation of women’s rights in Iran. With the start of the conservative era in 2005, she pointed out that the opportunities for activists to work on social and political issues were significantly reduced. With threats of persecution and jail, some activists left the country while others were put in prison.

Ms. Kakaee noted that despite this, Iranian activists are still doing their best to raise awareness about violence against women. For example, they wore make-up to look like they were battered, went out to the streets, and used the opportunity to speak to people about violence.

Arguing that international sanctions against Iran have had a profound impact on the women’s movement, she said, “Sanctions cause insecurity for women in the society…make the economic situation worse,” and contribute to poverty, which in turn pushed back women’s social gains.

In order to remedy the situation, Ms. Kakaee offered some solutions. “I think the international community should provide [Iranian activists] the opportunity to learn about civil society and improve their skills,” she said.

“At present, Iran is isolated and everyone just says, ‘We cannot work with this country,’ or they work with groups inside Iran who will be strengthened but will never ever work for positive change and for women’s rights…I think we need to exchange our experience and help people inside of Iran to communicate with the international community,” she said.

Visaka Dharmadasa, Executive Director of the Association of War-Affected Women, shared her experiences at the grass-roots level in Sri Lanka. “Sri Lanka is a post-war country; Sri Lanka is not post-conflict because the root causes of the conflict have yet to be addressed by the government,” she argued. “Sri Lanka has experienced a significant increase in violence against women, especially because of the fact that the government thinks this is a trivial issue, not threatening.”

She said that it’s important to understand that violence against women has a connection to democracy, governance, and the economy of any given country, as no country can develop or prosper if the women are not treated well.

In Sri Lanka, Ms. Dharmadasa has worked with the police and military, setting up 43 bureaus at the police stations specifically addressing women’s issues, including violence against women, which was the biggest challenge the police were facing today.

Discussing theoretical aspects of women’s movements was Arvinn Gadgil, Deputy Minister for International Development in Norway, who also offered his perspective as an outside actor.

“There’s no other academic discipline that has such a robust way of power analysis as feminism has,” he said. But he pointed out, the challenge for modern movements against gender-based violence is joining theory and practice and integrating the theoretical and lessons learned and finding out what works.

He reflected on the challenges of being outside actors, saying that even as they build networks through women’s organization, a constant dilemma they face is not eroding the very legitimacy of the movement itself.

He highlighted that Norway, a country which often acts as peace negotiator during times of conflict, encourages parties to include women in peace process.

He asked, “Can you call anything peace when 50% of the population is threatened?”

The event was moderated by Maureen Quinn, IPI’s Director of Programs.

Interview with Visaka Dharmadasa on War-Affected Women in Sri Lanka