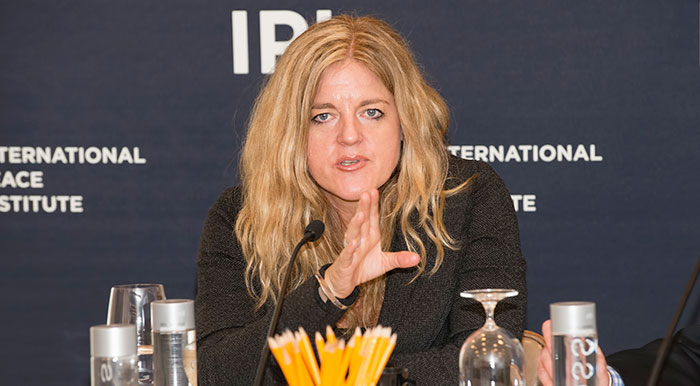 “The protection of civilians never operates out of context,” Hilde Johnson, Special Representative of the Secretary-General and Head of the UN Mission in the Republic of South Sudan (UNMISS), said at an IPI event on March 11, 2013. “It takes place within a context, and the context in the case of South Sudan is three [issues],” she said.

“One,” she explained, “South Sudan is a little over one and a half years old, so it’s a toddler struggling with finding its feet still and getting its feet solid on the ground. Secondly, South Sudan got its divorce from Sudan, before the divorce papers were finished and completed and negotiated between the two parties. And hence, thirdly, we have a situation where both sides are engaging in trying to finish off the remaining issues, but it has lead to increased tensions between the two, periodically within the last year, leading to even hostilities. So we are in a context which cannot be seen in isolation.”

Since declaring independence from Sudan in July 2011, South Sudan has struggled to build its fledgling nation as it faces rising insecurity, ethnic tensions, and outbreaks of violence. UNMISS upholds protection of civilians (PoC) as one of its core responsibilities, although the mission’s limited resources has made this objective difficult to achieve.

Ms. Johnson pointed out that for the past 18 months, virtually all of the energy of the country has been pulled into the Sudan-South Sudan relationship, becoming the predominate determinant to what happens in the country and what can be achieved.

Many of the security challenges are in remote and inaccessible areas, hampering the mission’s ability to protect civilians and showing that UNMISS needs a decentralized presence, she said.

She explained that despite South Sudan’s large size, UNMISS has a presence in all ten of South Sudan’s states, and the mission maintains a strong mandate to directly support the host government, working towards building the capacity of the Sudan People’s Liberation Army (SPLA) and the South Sudan National Police Service (SSNPS) to protect civilians.

Ms. Johnson said that UNMISS has developed a three-tier PoC strategy built on the guidance provided by the UN Department of Peacekeeping Operations (DPKO).

First was political action, which she described as “the most effective and the best way to protect civilians, to prevent any violent activities from happening.” As one of the most critical work that UNMISS partakes in, she said they make sure the host government fulfills its PoC responsibility and provides extensive support of the peace process, for example, in Jonglei State, the most conflicted area.

The second is the protection from physical violence, “which is the de-facto engagement by the military component of the mission,” Ms. Johnson said.

The third was providing a protective environment, which involves what the police and humanitarian actors can do. UNMISS mentors the SSNPS to provide security, rule of law, promote and protect human rights, and coordinate with humanitarian actors.

“We need to also make sure that [policy] permeates down to the field level,” she asserted, explaining that state offices have an obligation to develop its own state specific action plan for PoC. UNMISS’s PoC approach requires every state to have an operational plan and every base to have a PoC contingency plan. Some 400 staffers have already been trained on PoC strategy, she said. The mission has also developed an early warning, early response strategy for threats of violence and is helping to build similar capacities within the country.

“Clearly, the primary responsibility for protection of civilians will always rest with the country and its own armed forces and police,” she said. “This is the same in the case of South Sudan. With our limited forces – we have 7,000 as the envelope [and] 4900 as infantry – there’s no way we can compensate or replace the national army or the police.”

In addition, she said that although the primary protection actors in the country are the SPLA, the mission has also faced situations where, in some cases, the SPLA have been the one perpetrating violations against civilians. She explained that the force is still under formation and is still being professionalized.

Managing expectations and the resource gaps have been a challenge for the mission in the country. “When you have 4,900 infantry, there are limits to where you can be in a country that is the size of France,” she asserted. Some government officials and the public don’t distinguish between the protection of civilians mandate and the protection of the territory of South Sudan. She stressed that the mission is there to protect the people, not the territory.

Despite the challenges, UNMISS’s presence and operations have been successful in averting further violence and fighting. Jonglei State, a hot-bed for fighting, experienced cycles of inter-communal violence in the town of Pibor, from December 2011 to January 2012. In January, a column of 8,000 Lou Nuer fighters advanced to attack the town but were thwarted by SPLA forces, backed by peacekeepers. More than half of UNMISS’s peacekeepers were committed to Pibor operations. Despite this, she said that 612 people lost their lives.

Logistically, the mission has struggled with accessing remote regions of the country. Some 46 out of 79 counties are severely affected by floods, which last 8 months, and 65% of the country is cut off during those months. They are only accessible by helicopters in some locations. The muddy roads, some of which are critical passageways for the mission and humanitarian actors, take hours to get through, Ms. Johnson lamented.

Although the air is the main way of accessing the country, many areas lack airstrips, which lead to delays in mobilizing the mission’s engineering capacity, she went on to say. “Of our expenses, 40% of the mission support is purely fuel and aviation flight hours.”

She explained that because of the realities on the ground, the mission cannot respond to two simultaneous crises, forcing them to prioritize which civilians under threat they can protect.

Many civilians also seek shelter in UNMISS bases during outbreaks of violence, especially in Jonglei state. In January, 5,000 civilians took shelter with UNMISS, many remaining as long as a week.

While she was in Pibor, Ms. Johnson met with some of the UN peacekeepers, telling them, “You are the face of the United Nations, what you’re doing is to show that we really mean business with protecting civilians, with helping them and protecting the most vulnerable.”