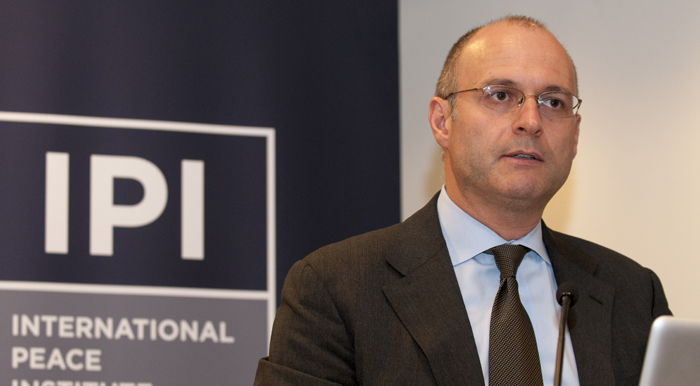 It was with this core question in mind that the International Peace Institute, together with the United Nations Development Programme (UNDP) and the United States Agency for International Development (USAID) launched a research initiative to explore how new technologies can be put to the service of conflict prevention. On April 10, 2013, an interactive discussion was held at IPI’s Trygve Lie Center to share the findings of the report.

The report, entitled “New Technology and the Prevention of Violence and Conflict,” explored five case studies, covering multiple tools in different contexts, including responses to crisis, conflict, and criminal violence, long-term prevention, and the potential of “big data” in conflict prevention.

“In only four decades, the total number of mobile phone subscriptions has reached almost 6 billion, corresponding to a global penetration rate of 86%,” said Francesco Mancini, Senior Director of Research at IPI and editor of the report. “Cell phone penetration in sub-Saharan Africa now exceeds 50%.”

The number of global Internet users has grown rapidly over the years, Mr. Mancini explained, as global access to the Internet has more than doubled in the past five years. However, he pointed out that the diffusion of technology has not been distributed evenly across regions.

With 12 million SMS messages sent per minute and 2 billion YouTube page views per day, “the amount and variety of data produced is a phenomenon of historical significance,” he said.

Mr. Mancini explained seven concrete points and insights from across the case studies that could be taken as a how-to-guide for international organizations, governments, and civil societies actors seeking to leverage new technology in conflict prevention. They were: to examine all the tools are their disposal; consider the context (from socioeconomic, cultural, and demographic factors); consider the possible knock-on effects of applying specific technology; integrate new technologies with existing civil society initiatives; use technology to help information flow horizontally; establish data use rules; and finally, foster partnerships for better results.

Discussing the benefits of new technologies in enhancing good governance, participation and preventing violence was Jordan Ryan, Assistant Administrator and Director for the Bureau for Crisis Prevention and Recovery at UNDP.

He remarked that technology changes the way people interact with one another and governments, increasing people’s voices and offering new ways of participating. In his view, even with the limitations, the opportunities with technology outweigh the challenges.

Mr. Ryan also discussed the recent Kenyan elections, in which local communities were involved in the process by using texting to better integrate action and response in a timely fashion to threats of violence.

Besides preventing violence and conflict, he said, technology can also be used in building peace and holding government accountable to its citizens.

Neil Levine, Director of the Office of Conflict Management and Mitigation at USAID offered five reflections coming out of the report: technology is a tool-kit that needs to be used wisely; no amount of technology can be a substitute for a deep, textured understanding of a particular local context; technology can spread information on violence to a greater amount of people; enhanced technological capacities can also spread to negative actors; and no tool can prevent conflict in situations which often requires a political solution, but instead can be used in the service of finding those solutions.

Sharing his findings from the big data case study was co-author Emmanuel Letouzé, PhD candidate at UC Berkeley and Adviser on Big Data to the OECD-Paris21 Initiative.

Mr. Letouzé labeled the explosion of data as the “big data revolution;” according to the report, humans have generated more data in 2012 alone than over the course of their entire history.

Mr. Letouzé defined big data as “traces of human actions picked up by digital devices” and the research ecosystem that makes sense of them.

He explained that while technology has had a huge operational impact, conflict prevention continues to be primarily political and many challenges remain. He highlighted three challenges and risks with big data usage, which were that claims to objectivity and accuracy can be misleading, there are sometimes ethical questions over accessibility, and limited access to big data creates new digital divides.

Mr. Letouzé pointed out that while big data is good at predicting where an event, such as a revolution, is going to happen, often times, it over predicts, which begs the question of how to model human behavior.

Helena Puig Larrauri, author of the Sudan & South Sudan case study, also presented her findings via video from South Sudan. She said the key to successful use of technology in conflict prevention depends on whether technology facilitates the creation of actionable data.

The event was moderated by Warren Hoge, IPI’s Senior Adviser for External Relations.