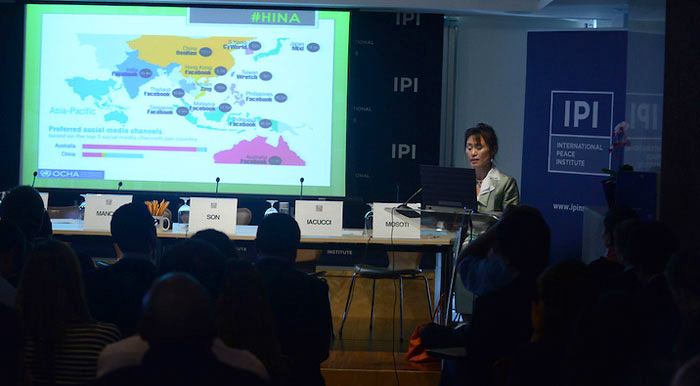 “Technology is central to community response, which means it’s also central to resilience,” said Gwi-Yeop Son, Director of the Division for Corporate Programmes at the United Nations Office for the Coordination of Humanitarian Affairs (OCHA), on April 25, 2013.

Ms. Son spoke at the launch of OCHA’s new publication, Humanitarianism in the Network Age (HINA),” during a panel discussion held at IPI. The report explores how new information and communication technologies are bringing people in need closer to people in the humanitarian community.

Ms. Son began by providing the example of a young woman from the Philippines who, during the country’s August 2012 floods, used Twitter to get help for her disabled grandmother. The woman, according to Ms. Son, was emblematic of the vision presented by the report of increasingly informed, connected and self-reliant communities.

“The fundamental change is this: the use of technology in crisis is being driven ultimately by one particular group—the affected people themselves,” Ms. Son continued. “For them, a phone is not a toy. It helps them run businesses and tap into networks. It is a radio, a camera, a source of income, a way onto the Internet and for increasing numbers, it is a mobile bank.”

Ms. Son went on to highlight the four key recommendations from the report: recognize communication and information as a basic need in humanitarian response; ensure that the information relevant to humanitarian action is shared freely; build new capacities in aid organizations and governments to understand and use new information sources; and develop guidelines to ensure that information is used in an ethical and secure manner.

Information tools are an intrinsic part of the humanitarian battlefield, she said, and should always be used in line with humanitarian principles.

Anahi Iaccuci, Head of Innovation at Internews and co-founder of the Standby Task Force (SBTF), discussed how the SBTF came about as an idea to get volunteers online together to establish a formal interface for the humanitarian community.

During the crisis in Libya, 300 volunteers came together online through the Task Force, filtering information coming from blogs, newspapers, online, television, Twitter, Facebook, and the radio coming from Libya and processing it into 1,300 different reports that OCHA used to understand the situation on the ground.

To see whether the humanitarian community was listening to the people on the ground, Intranews did an investigation in the Dadaab refugee camp in Kenya. According to Ms. Iaccuci, they found out that the aid community was making decisions about the lives of the affected people without involving them in the discussions.

She argued that integrating communication technology with humanitarian responses is not just about giving people a voice, which they already have. It’s about the interaction with the people and how to incorporate the people into the way decisions are made among the humanitarian community.

Discussing some initiatives Kenya has implemented to allow for greater access to information was John Mosoti, Technical Advisor to the Permanent Mission of Kenya Mission to UN. In 2010-2011, the Kenyan government came up with the Open Data Initiative (ODI), a system that allows data to be readily available to the public in a single portal and can be used, reused, and redistributed. Mr. Mosoti pointed out that the government acknowledged that access to information was an issue of governance and transparency.

He also discussed M-Pesa, a Kenyan mobile-based money transfer system that carries out banking activities. With over 19 million mobile phone customers in the country, the system, he highlighted, supported many of those affected by post-electoral violence in 2008.

However, even though open data has been beneficial, Mr. Mosoti went on to mention some of difficulties, as it may be costly, or complex and difficult to understand.

Desiree Matel-Anderson, Chief Innovation Advisor at the United States Federal Emergency Management Agency (FEMA), shared with the audience some of FEMA’s efforts in collaborating with corporations and NGOs to be a part of disaster recovery and response efforts. During Hurricane Sandy, the innovation team work with their partners to give communication and Internet connectivity as a form of aid, allowing people to communicate their needs and finding necessary resources.

Ms. Matel-Ansderson said that technology has lateralized how business is done during disasters.

Nathaniel Raymond, Director of the Signal Program on Human Security and Technology at the Harvard Humanitarian Initiative, applauded the report’s list of four key recommendations and noted the continuing debate over whether access to information and the ability to use it during a disaster is a human right.

“This is the first time that we have made significant progress as the international community to make the big pivot on what’s fundamentally not a technology issue; it’s a human rights one,” he said. “[We’re] doing this innovation cycle and frenzy without a rights-based approach. We’re doing it without a framework.”

Mr. Raymond asserted that because the Universal Declaration of Human Rights contains the basis that individual human beings have the right to connectivity, governments have a corresponding responsibility to realize that right to information during disasters.

The event was chaired by Francesco Mancini, Senior Director of Research at the International Peace Institute.