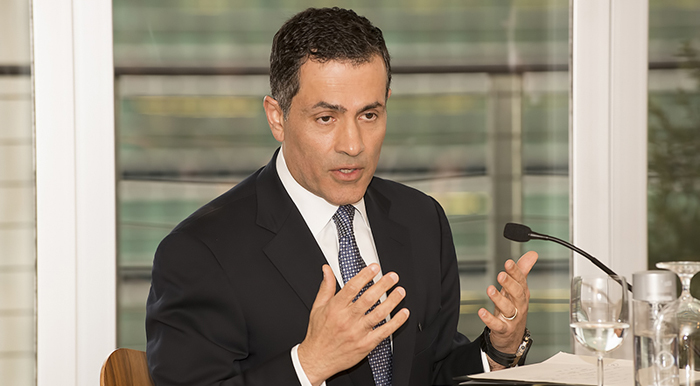 “We have lost the ability to use diplomacy effectively, and we still have to sort out how we place foreign policy in the right perspective, in the context of our domestic interests and agenda, but also in the context of what we think about our military power and military might, and how we use it globally,” Vali Nasr, author of the new book The Dispensable Nation: American Foreign Policy in Retreat, asserted before an IPI audience on April 24th, 2013.

In the book, Mr. Nasr, who is the Dean of the Johns Hopkins School of Advanced International Studies, called into question America’s choice to engage less in the world and charted a path forward for how the United States can regain its lost influence.

Drawing on his long experience as a scholar and expert on the Middle East, and on the insider’s knowledge he gained as a State Department adviser for Afghanistan and Pakistan from 2009 to 2011, Mr. Nasr said that behind many decisions lurked a desire by the White House to pivot towards Asia and away from the complex problems of the Muslim world. But the Middle East, he argued, will remain a region where a great rivalry is played out, with China now taking on the role of the Soviet Union.

In 2009, during the war in Afghanistan, the US began to increase the number of troops deployed, committing to 17,000 additional troops in February. Questioning this decision, Mr. Nasr argued that at some level, the insistence of putting more troops on the ground was because of what he called the “Iraq overhang.”

He remarked that while President Obama’s election was partly because he challenged the wars in Iraq and Afghanistan, “he was not able to move his own new strategy for a war he was now beginning to own from the shadow of the Iraq war.”

In his view, the war in Iraq was a disaster, and in Afghanistan the Obama administration gave into the military’s strategy of Iraq-style counter-insurgency. He argued that domestic considerations dominated the way the US approached Afghanistan.

Mr. Nasr served as senior adviser to Richard Holbrooke, the US special representative to Pakistan and Afghanistan. He said Mr. Holbrooke believed the troop surge was a mistake. “The surge to him was a sprint, and what he thought Afghanistan needed was a marathon,” Mr. Nasr said.

For Mr. Holbrooke, the surge would lead to withdrawal from Afghanistan faster and would be costly, arguing that it would be more credible to everyone if the US stayed longer and pushed for a diplomatic and political settlement.

Mr. Nasr argued that American foreign policy should be run by diplomats, not by the military and security establishment which thought that since Iraq didn’t end up at the negotiating table, neither should Afghanistan.

He said that Mr. Holbrooke’s solution never got a hearing. “There was no diplomatic strategy on the table,” he said, asserting that the White House was set up to favor the military.

Nevertheless, Mr. Nasr argued, the Taliban haven’t been defeated, there’s no peace process, and the US will hand over the war that they couldn’t finish to the unprepared Afghan security forces. “Our main mode of engagement with the region is security but except instead of COIN [counter-insurgency], it’s drones; instead of the military, it’s special forces,” he said. “Still, we’re not diplomatically engaged.”

“The Middle East refuses to be ignored,” he stated. “The Middle East has been the measure of America’s foreign policy for over a decade.” But even though the region holds enormous importance, Mr. Nasr said that the US is disengaging with it.

“The future of the Middle East is being decided in Syria and Egypt. What comes out of these two countries will decide the shape of the future,” he declared.

Mr. Nasr also discussed America’s pivot towards Asia, which he believed was to prevent China from establishing hegemony. However, he pointed out that the US looks to Asia as solely the Asia Pacific while the Chinese look to the region as a whole, from the Mediterranean to the Sea of Japan, including the Middle East.

Regarding Iran, Mr. Nasr highlighted that the Bush administration created a policy of sanctions to get the Iranians amenable to talks but it has been largely a single-track policy. He didn’t think the US was serious about negotiations, arguing that the P5+1 (Britain, China, France, Russia, the US + Germany) format of negotiations is not effective, because the Iranians believe that the US holds veto power.

He concluded by asserting that American leadership around the world matters, arguing that a world without America’s influence and stabilizing power would be a lot more problematic.