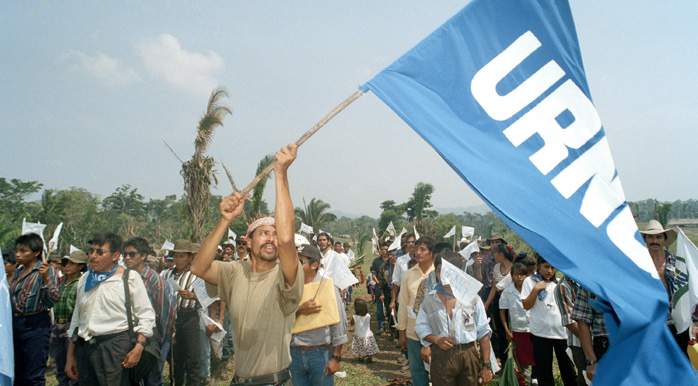 Members of the Unidad Revolucionaria Nacional Guatemalteca during their demobilization process, January 1997.

This book chronicles the critical role played by the United Nations in the immediate aftermath of the Guatemalan civil war, which ended in 1996 after more than thirty years of fighting and more than 200,000 lives lost. During the UN peace operation’s ten-year endeavor (1994-2004) to build conditions that would sustain a lasting peace in the country, the mission faced challenging political contexts and grappled with uncooperative political elites and persistent state corruption, organized crime, and social inequality.

Unusual among UN peace efforts because of its largely civilian nature, its General Assembly mandate, and its heavy reliance on UN volunteers to staff field offices, MINUGUA (UN Mission for the Verification of Human Rights and of Compliance with the Comprehensive Agreement on Human Rights in Guatemala) focused initially on human rights; beginning in 1997, however, its scope expanded to include verification of the full range of peace accords designed to end 36 years of civil war between the government and the revolutionary insurgency.

Enabling Peace in Guatemala is the second volume in IPI’s Histories of UN Peace Operations, a project initiated by the UN’s Department of Political Affairs (DPA) and Department of Peacekeeping Operations (DPKO), with the strong support of then Secretary-General Kofi Annan. It arose out of a recognition that, for all the academic literature about UN peace operations, the inside story of individual UN missions often went untold.

The first volume is: Peacekeeping in Sierra Leone: The Story of UNAMSIL.

About the Author:
William Stanley is professor of political science at the University of New Mexico. His publications include The Protection of the Racket State: Elite Politics, Military Extortion, and Civil Wars in El Salvador.