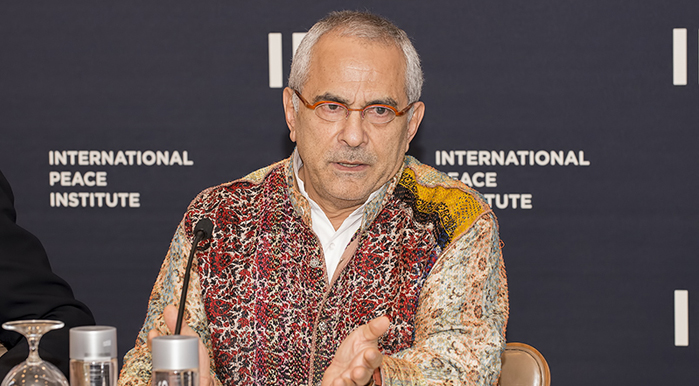 In his briefing to the Security Council the day before appearing at IPI on May 10th, José Ramos-Horta, Special Representative to the Secretary-General on Guinea-Bissau, told the Council that the beleaguered country “exists in name only.” A former Portuguese colony, it has been hindered by economic instability, drug trafficking, and a political landscape dominated and controlled by the military.

But Mr. Ramos-Horta said he was optimistic that its fortunes can be improved by a combination of good leadership, effective regional institutions, modernization of the armed forces and institutional capacity building, and must be supported after democratic elections are held. He noted that no one should be excluded.

“You have to work with all the local [and] national actors, regardless of who they are,” Mr. Ramos-Horta said at the heavily attended IPI event. “The secretary-general didn’t send me to Guinea-Bissau to talk only to angels. We have to talk to everybody from A to Z, to understand, to inspire people.”

Mr. Ramos-Horta, winner of the Nobel Peace Prize in 1996, is the former President and Prime Minister of Timor-Leste. He was appointed the SRSG to Guinea-Bissau in January 2013. After four months, he has brought his past experience in Timor-Leste to address what he refers to as very similar challenges in Guinea-Bissau.

In advance of a Security Council resolution extending his mission in Guinea-Bissau for another year, SRSG Ramos-Horta shared the following insights:

1. Elections will be held in Guinea-Bissau by the end of the year. If the country can meet demands for an inclusive government, it is highly likely that the African Union will lift sanctions on the country. This will help break the tragic cycle in Guinea-Bissau of poverty followed by a coup followed by sanctions, which ends up causing more poverty. Sanctions have impacted not only the economy but also the mindset and morale of the population. Nevertheless, the population remains extraordinarily peaceful and averse to violence with no inter-ethnic tension.

2. The international community must not lose interest in Guinea-Bissau after the elections. This will be the vital second phase in which the state institutions must be rebuilt, and the UN should implement a scaled-down version of what it did in Timor-Leste. International organizations should start building up capacity in ministries, the banking system and justice mechanisms now so progress is made before the elections. Quick impact projects are vital to support longer term institutional rebuilding.

3. Equally, the international community has a right to accountability from the political elite and the military.

4. The UN is not, nor should it be, the lead agency in this conflict; it is the Economic Community of West African States (ECOWAS). The more effective regional organizations are in dealing with problems, the better for the international community. Despite different positions on the mission at the start, the African Union and ECOWAS have formed a common strategy and they deserve credit for this, but they need resources. An integrated approach is not easy, but is necessary.

5. Nothing is black and white, and it is important to engage with all the local and national actors, regardless of current allegations or past actions. The secretary-general did not mean for the position to only engage with NGOs.

6. The Peacebuilding Commission has done excellent work and the Security Council resolution will confirm that the UN will assist in the elections following a request from Guinea-Bissau.