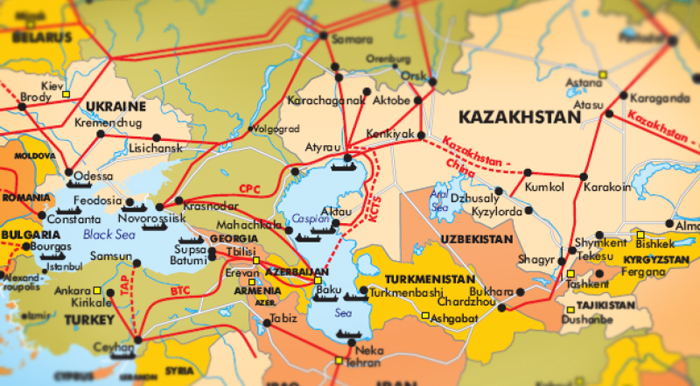 On June 28th, the IPI Vienna Office hosted an expert roundtable on energy and security in the Caspian, Caucasus, and Central Asia. The roundtable focused on the region around the Caspian Sea, which is potentially the world’s third largest oil producing region, with reserves of more than 200 billion barrels of oil and 800 billion cubic feet of gas.

Energy is a major factor in the political and economic relationship between countries of the region and major markets in Europe and China. Particular attention was paid to Azerbaijan, Kazakhstan, and Turkmenistan, which are the biggest producers of oil and gas in the region.

The meeting was the first in a series of regional roundtables that will provide input to IPI’s energy and security task force, which has these aims: 1) to identify the impact of energy on security (and vice versa); 2) to examine what structures and mechanisms exist to promote multilateral cooperation on energy issues; and 3) to make recommendations on how energy-related governance structures can improve regional stability.

Participants in the roundtable observed that, despite a plethora of energy security frameworks, very few are suited to promoting cooperation on energy-related issues. For example, there is no body to promote cooperation among states of the Caspian, nor a legal agreement among the five littoral states to resolve disputes or to ensure long-term security and development in the Caspian. Past attempts to promote Caspian economic cooperation and a Caspian bank were recalled. The precedents of regional and sub-regional councils in other parts of the world (such as the Arctic, Baltic Sea, Black Sea, and among Nordic countries) were cited as possible models.

In Central Asia, water is a major energy-related issue. Upstream countries (i.e., Tajikistan) seek to use rivers for hydro-electric power which concerns downstream countries (i.e., Uzbekistan) that rely on the water for irrigation. While bilateral and regional agreements are essential to resolve water-related disputes, thus far the countries of Central Asia have been unable to find ways to work together. Attempts to integrate Afghanistan into energy projects involving countries of Central Asia were pointed to as an opportunity to promote regional cooperation, economic development, and stability.

Concerning the Caucuses, it was noted that energy is not a source of tensions, but could be used as a means of promoting confidence and cooperation among countries of the region. The importance of the Southern Corridor and Turkey’s growing role as an energy hub were highlighted.

Observations and recommendations from the expert-level meeting will be shared with the energy and security task force, which is scheduled to meet on the margins of the high-level segment of the UN General Assembly at the end of September.