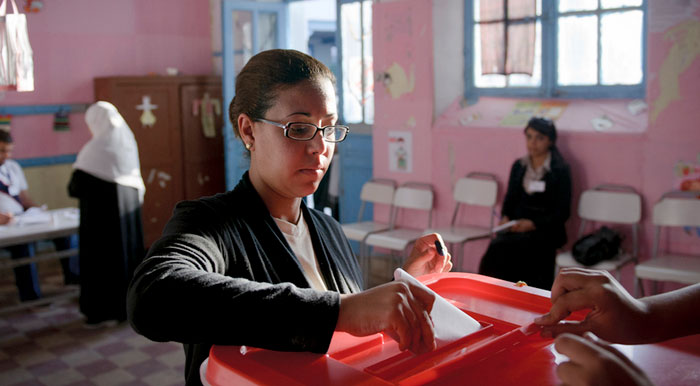 As Tunisia prepares to vote on its constitution next month, two reports examining draft constitutions for Tunisia and Egypt found that language guaranteeing equal citizenship between men and women has not been included, though citizenship was not explicitly undermined on the basis of gender. The two reports were prepared by the Arab Forum for Citizenship in Transition (FACT), a regional initiative supported by the International Peace Institute.

The first report, Equal Citizenship in Tunisia: Constitutional Guarantees for Equality between Citizens, examined several Tunisian draft constitutions from political parties and civil society, and found treatment of the issue of equality between men and women varied widely; the report said that some drafts “did not allocate a single article to enunciate equality and non-discrimination between men and women.” Most drafts did not give much attention to universal rules concerning human rights.

The report’s author Salwa Hamrouni argues that the issue of equality in the Tunisian constitution “can be resolved in a single article that enunciates the principle of non-discrimination between men and women in all rights and duties, whether it relates to civil and political rights or economic, social, and cultural rights or family rights. The constituent power can also reach the same conclusion by always referring to both ‘male’ and ‘female’ citizens simultaneously.”

The report presents recommendations for the National Constituent Assembly to ensure the inclusion of freedoms, rights, and equality of citizenship in the constitution. It underscores the importance of adopting the principle of non-discrimination between men and women in all rights and duties, from civil and political rights to family rights, and pushes for the constitution to provide mechanisms to ensure the commitment of constitutional laws and principles.

The second report, Women and Equal Citizenship: Analysis of the New Constitution of Egypt, examined the final draft of Egypt’s constitution and found that important rights regarding the status of women were muddled in vague text and written with a conservative vision for the society. Egypt’s constitution was signed into law last December.

“From the perspective of equal citizenship, the constitution does not reach a satisfactory level in any of the dimensions examined and fails to reflect the spirit of the revolution in which women and men participated on equal footing,” argues the author.

Though not explicitly undermining citizenship on the basis of gender, the study, authored by Mohamed Al Agati, executive director of the Arab Forum for Alternatives, found that the draft constitution lacks proper mechanisms for the protection of women’s rights, with no mechanisms to address discrimination based on sex or the creation of oversight agencies. The study finds the document falls short of affirming and enforcing full equality among citizens, and remains traditional in form and content. The report recommends using legal, political and social instruments to work towards guaranteeing these rights.

The report found the gaps were a possible result of the clear lack of female voices in its formation—the Constituent Assembly had very low representation and participation of women (6%).

The reports were prepared by IPI’s Arab Forum for Citizenship in Transition (FACT), which aims to be a regional exchange platform on the exercise of equal citizenship in Arab countries in transition, with particular focus on gender equality. Working together with local civil society organizations and government actors, FACT pursues its vision though public policy-oriented research, advocacy, convening, and training, at local and regional levels.

More about the reports: