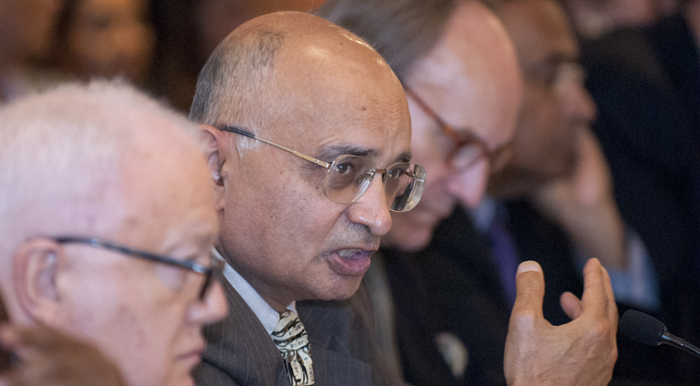 The nuclear status quo is not sustainable— this was one of the main conclusions from a June 7th IPI roundtable discussion on the recently published report entitled “Nuclear Weapons: The State of Play,” edited by Ramesh Thakur and Gareth Evans.

Discussants at the event contended that regulating and containing the world’s supply of nuclear weapons continues to be a major challenge in global governance today, and while there have been pockets of progress made, they are largely rhetorical or symbolic in nature, and significant gaps remain.

The discussion yielded the following insights:

1. Global governance, in the context of nuclear weapons, is a two-tier system of the “haves and the have-nots.” The world must ensure that the structure is abolished in order to work toward the complete elimination of nuclear weapons.

2. More than $100 billion dollars is spent every year in maintaining and modernizing nuclear weapons. The report finds that modest progress has been made on nuclear arms reduction. Russia and the U.S. have made cuts to their stockpiles under the START treaty, while France and the U.K. have met their disarmament objectives. However, no progress has been made in reducing the high launch-alert status of 2,000 American and Russian weapons. The report argues that nuclear-armed states pay merely lip-service to the complete elimination of nuclear weapons and continue to place nuclear arms in their security policies.

3. Some progress has been made on the global nuclear architecture and on efforts towards reducing proliferation risks of peaceful uses of nuclear energy. However, international standards, accountability, transparency, and the means to judge whether commitments are being met are lacking.