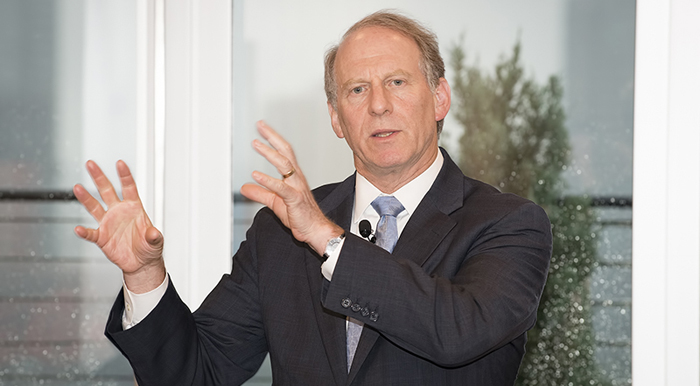 “I have a strong sense that the United States, over the last decade or so, has somewhat lost its way in the world,” said Richard Haass, President of the Council on Foreign Relations and author of the new book Foreign Policy Begins at Home: The Case for Putting America’s House in Order.

Speaking to an IPI audience on June 10th, 2013, Mr. Haass said, “If I had to sum it up in a phrase, we’ve overreached abroad, and in particular, in the greater Middle East, first in Iraq, then in Afghanistan. The United States has embarked on extraordinarily ambitious efforts to essentially remake societies and create institutions where there were very few, and create capacities where they simply didn’t exist before.”

In his book Foreign Policy Begins at Home, Mr. Haass argues that America’s continued influence and leadership in the world is dependent upon its ability to confront pressing challenges at home and progress in a 21st-century “nonpolar” world of American primacy but not domination.

With slow economic growth, declining infrastructure and school systems, immigration policies that make little strategic sense, and the looming challenges of long-term entitlement obligations, he argued that the United States is underperforming domestically.

“What this suggests to me is that our political system is not addressing these things, and this is not simply a matter of standard of living [or] quality of life,” he said, “but if we’re going to have the resources we need to be a great power well into the 21st century, we’ve got to repair —or, to use my favorite word, restore—the foundations of American power, and we’re simply not doing that.”

He added, “These two things, the fact that we’ve overreached abroad and underperformed at home, are related because national security is made up of our foreign policy and domestic policy. They’re two sides of one coin.”

Mr. Haass stated that, under the rubric of restoration, the US “ought to restore the proper balances of American policy when it comes to national security,” and rebalance American foreign policy away from the Middle East and more towards Asia “because that’s the part of the world where the great powers are interacting, where I believe a lot of 21st-century history will be written.”

Asia, Mr. Haass continued, is a region where–in contrast to the Middle East–the diplomatic, economic, and military tools of the United States have traction to prevent disputes, promote new regional trade agreements, and keep the peace.

Contending that the US has ignored the foundations of its power, he said “Domestically, we’re not doing things we need to get US economic growth roughly double the level it is now, or deal with long term vulnerabilities—in particular, our needs to import massive amounts of wealth in order to offset our continuing deficits and our mounting debt.”

Getting it wrong would not only be bad for American competitiveness, he said, it would be bad for the world.

“The alternative to a world that is led by the United States is a world that’s simply un-led. The world is not going to regulate itself. Peace, prosperity, openness, and freedom are not simply going to come about as the natural result of the natural order of things,” he said.

“History is always the total of ideas and what people do with them,” he added. “The biggest single variable is not the lack of ideas, but people in the political process. And the question is whether the American political process is up to brokering the kinds of compromises around the kinds of policies that will, again I think, essentially restore the proper balances within the national security world.”

In regards to Asia, Mr. Haass said that the US needs to manage its rivalry with China while being supportive of its allies in the region so that they continue to live and act under the American security umbrella.

He argued that the single most daunting diplomatic foreign policy challenge facing the United States is its relations with China, describing the recent talks between President Obama and China’s President Xi Jinping, as foundational in setting a real strategic agenda for their bilateral and regional relations.