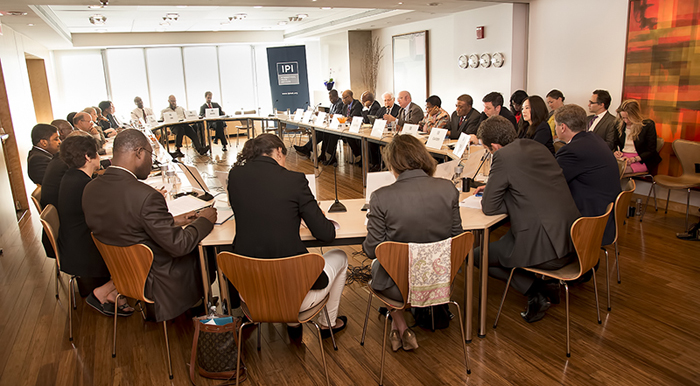 On June 6, 2013, an expert roundtable meeting at the International Peace Institute examined the underlying causes of instability in the Gulf of Guinea region. Participants said that insecurity, transnational organized crime, border disputes, and people and drug trafficking are on the rise in the Gulf of Guinea, and that these multidimensional challenges have emerged as a result of weak political institutions, violent conflict, climatic and demographic pressure, lack of economic growth, and the misappropriation of natural resource revenues.

Given the interconnected and transnational nature of these drivers of instability—which are also linked to the current crisis in the Sahel—solutions will require effective coordination among all regional institutions concerned.

Speakers at the meeting included representatives from the African Union, the Gulf of Guinea Commission, the Permanent Mission of Benin, and the United Nations.

The discussion offered a number of insights into the nature of the threats and possible responses:

1. Stability starts with human security. Ensuring the provision of basic services, such as healthcare and education, along with opportunities for economic advancement, livelihood security, and social equality will address feelings of alienation and economic hardship, which are key drivers of instability.

2. Poor governance and pervasive corruption have led to a loss of confidence in governments. Many in positions of influence benefit from the proceeds of transnational organized crime, from development funds provided by international organizations, and from oil and gas extraction. But these revenues do not trickle down to local communities, causing further tension.

3. Pollution caused by aggressive resource extraction in the region has exacerbated the challenges of poor social service delivery and limited infrastructure, increasing the frustration felt by local communities at the perceived international exploitation of their resources. This has bubbled over into violence and insurgency, and piracy is an extension of this land-based instability.

4. At national level, states can act to resolve extreme economic deprivation and the politics of exclusion. In Benin, for example, the government has taken steps nationally and internationally to address these threats, resulting in the adoption of UN Security Council Resolution 2039 (2012) and a number of logistical and legal reforms. These have strengthened Benin’s ability to tackle piracy and brought greater regional cooperation.

5. At the regional level, the Economic Community of Central African States, Economic Community of West African States, and the Gulf of Guinea Commission are expected to adopt joint strategies for closer partnership at a summit in Cameroon on June 24 and 25, 2013. Regional leadership, political engagement, and continued cooperation between these organizations will be necessary to deliver results.

6. National and regional initiatives will require international support and the continued engagement of the UN Security Council. Resources should be directed toward an action plan to operationalize these strategies and build on regional political will.