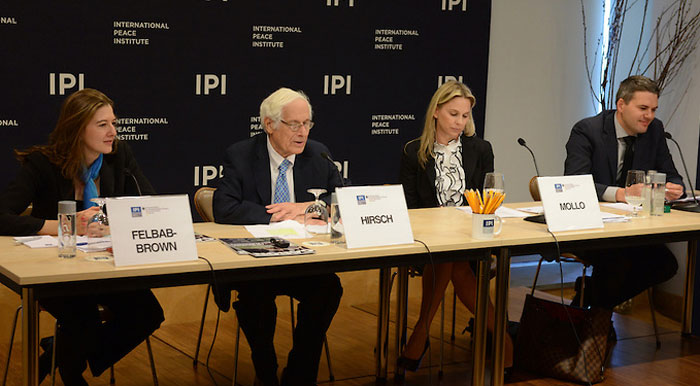 Poaching is becoming a development, gender, health, and security issue, and needs holistic approaches to end the demand for wildlife products and communities’ dependence on poaching. This was the key message that emerged from a policy forum organized by the International Peace Institute and the Permanent Mission of Germany to the United Nations on June 20, 2013.

The policy forum addressed a range of issues from the impact of poaching on the environment, the economy, and peace and security to the need for enhanced policy effectiveness. The link between poaching and organized crime, social destabilization, and armed conflict was highlighted. Three panelists represented respectively the UN Group of Experts on the Democratic Republic of the Congo, African Parks Foundation, and The Brookings Institution.

The discussion offered a number of insights on the risks posed by poaching and useful policy recommendations:

1. Poaching involves a complex network of actors, including criminal and armed groups such as the Lord’s Resistance Army in central Africa. Building on poor governance, corruption, and communities’ lack of economic opportunities, poaching contributes to social destabilization and poses serious risks to biodiversity. By fuelling conflict, poaching also constitutes a growing threat to international peace and security.

2. Poaching is unlikely to be eliminated unless the demand for ivory and other wildlife products is significantly reduced. Constructive dialogue must be part of strategies aimed at changing traditional beliefs in countries such as China and Thailand, where the growing demand for ivory reinforces the economic value of poaching in local communities in Africa.

3. Urgent action is also needed at the source. Response options must tackle the root causes of poaching while ensuring communities’ involvement and ownership. Equitable sharing of resources from ecotourism projects must provide durable alternatives to poaching as a source of livelihoods and social mobility. Depending on the context, legal trade—if allowed—should be coupled with effective law enforcement.

4. The enforcement of existing regulations needs to be strengthened. Law enforcement efforts should target poachers on the ground and crack down on complicity between officials and criminal networks. These efforts must also fight corruption and impunity at higher levels of government.

5. At the international level, strategies used in the UN Security Council’s sanctions regimes could be extended to poaching. “Naming and shaming” of alleged perpetrators could be applied to armed groups including the national army of the Democratic Republic of the Congo (DRC), whose involvement in poaching has been established.

6. A stronger emphasis by the Security Council on ivory trade could help strengthen related investigations by the Group of Experts on the DRC. Moreover, the due diligence guidelines for multinational companies involved in the exploitation of mineral resources could be broadened to include products from poaching and illicit wildlife trade.

7. On the ground, the UN Stabilization Mission in the DRC (MONUSCO) has not been as effective as it could be in supporting groups already fighting poaching. MONUSCO could provide these groups with support including logistics, intelligence, and training, as well as sharing of information and best practices.