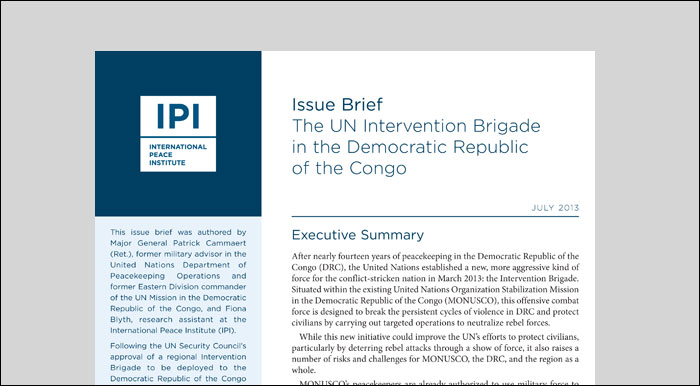 The fall of Goma to the M23 rebel group in November 2012 pushed the UN’s Department of Peacekeeping Operations to revisit its mission and mandate in the Democratic Republic of the Congo (DRC). After nearly fourteen years of peacekeeping in DRC, the UN is now deploying a new kind of “offensive” combat force—the Intervention Brigade—to break the cycles of violence by neutralizing and disarming rebel groups.

While this new initiative could improve the UN’s efforts to protect civilians, particularly by deterring rebel attacks through a show of force, this issue brief shows that the Intervention Brigade also raises a number of risks and challenges:

• The brigade’s deployment makes the UN a party to the conflict, which may taint the UN’s neutrality with consequences for peacekeeping worldwide.

• This also increases the risks for civilian personnel in the existing peacekeeping mission in DRC, who may become targets of rebel reprisals. At the same time, strengthened military operations could further jeopardize the civilian population in the DRC.

• The Congolese armed forces will be critical to supporting and consolidating any gains made by the Intervention Brigade, so building their capacity will be vital for the brigade’s success.

• Military intervention unsupported by a political process could actually discourage parties from negotiating; instead, the brigade will need to create political space for the broader strategy articulated in the Peace, Security, and Cooperation Framework for the DRC and the region.

• The regional nature of the Intervention Brigade is a strength, for the most part, but the brigade will require continued regional support alongside the political process so that it can be part of a sustainable solution.