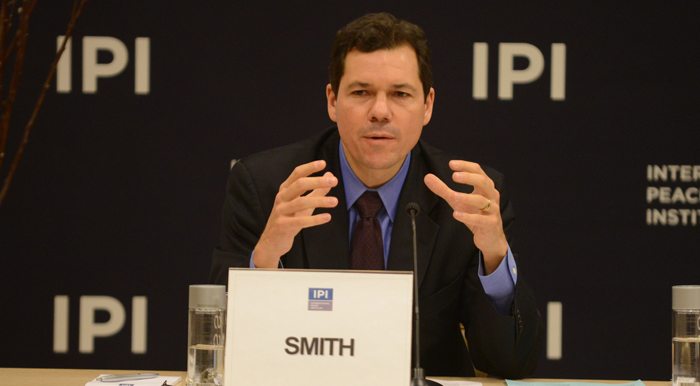 “The main purpose of this election is about securing a certain amount of stability and transferring power according to the written constitution,” said Scott Smith, Director of Afghanistan and Central Asia Programs at the United States Institute of Peace, during a forum at the International Peace Institute to discuss the much anticipated April 2014 elections in Afghanistan.

“That constitution,” Mr. Smith added, “is accepted by the political elite as the rules of the game for allocating and legitimizing power.” He contended that without these rules, power-holders would revert to the rules of the other game they know—armed conflict. “All of the political parties, who have political facades, also have armed groups behind them,” he said.

Maureen Quinn, IPI Director of Programs and chair of the October 25th event, noted in her opening remarks that the presidential and provincial elections are taking place against the backdrop of next year’s withdrawal of the International Security Assistance Force (ISAF). The ISAF has dominated the security landscape in Afghanistan since 2002.

Craig Jenness, Director of Electoral Assistance Division at the United Nations Department of Political Affairs, cited Secretary-General Ban Ki-moon’s comment that, “The true measure of an election is whether the public has confidence in the process and trust in the outcome.”

Mr. Jenness noted that the Independent Electoral Commission and Electoral Complaints Commission are now fully managed by Afghans. He added that the elections will be supported technically and financially by the international community, including the UN.

Martine van Bijlert, Co-director of the Afghanistan Analysts Network, who has lived and worked in Kabul for a decade, noted that elections boost political engagement across the country. “Elections energize the whole political class,” she said. “Everybody who would like to reposition themselves—strengthen their position, maybe gain new positions—is involved.”

Ms. Bijlert argued that the revitalization of politics is occurring despite the fact that voters feel the process is imperfect. She said that the populace believes that, of the four factors that determine election outcomes, the popular vote is the least influential, and that outcomes are influenced more by international intervention; behind the scenes, pre-election deal making between stakeholders and powerbrokers within Afghanistan; and voter manipulation and fraud.

Anywhere in the world, fraud prevention measures impinge on enfranchisement of voters, Mr. Jenness contended. “The reality is that the electoral commission must find a balance,” he said. “If they are extraordinarily strict on anti-fraud provisions that will necessarily create lesser conditions for people to cast their ballots.”

Mr. Jenness pointed out several challenges for the election commission, many of them cultural. To encourage more women to vote, the commission created more separate polling stations for women. They will also keep the ballots open only during daylight hours, as it is problematic for some women to travel after dark, he said.

Mr. Smith pointed out that the “wild card” is the large number of youth who have come of voting age since the last election. “They share aspirations,” he said. “They have the most to lose if this process fails and we end up back in a situation of proto-civil war. But, so far, they haven’t been much organized.”

He noted that when the youth did organize on the local level, they were co-opted by warlords, power brokers, and strongmen. He argued that the youth block could have a decisive effect on the elections, and that they may be maintaining a strategic ambiguity until the final stages of the race.

The panelists agreed that elections have become a part of the political culture in Afghanistan, and that despite flaws, the process works. That is, they said, the will of the people is reflected by the ballot box.