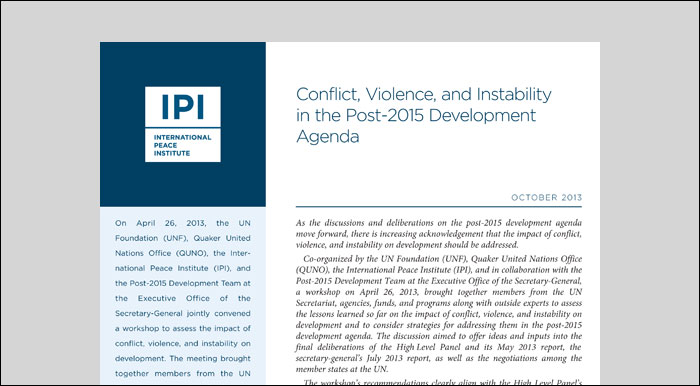 This meeting note summarizes the findings of a workshop on April 26, 2013, which brought together members from the UN Secretariat, agencies, funds, and programs, along with outside experts to assess the lessons learned so far on the impact of conflict, violence, and instability on development, and to consider strategies for addressing them in the post-2015 development agenda.

Co-organized by the UN Foundation, Quaker United Nations Office, the International Peace Institute, and in collaboration with the Post-2015 Development Team at the Executive Office of the Secretary-General, the discussion aimed to offer ideas and inputs into the final deliberations of the High-Level Panel and its May 2013 report, the secretary-general’s July 2013 report, as well as the negotiations among the member states at the UN.

These are the key recommendations of the workshop: