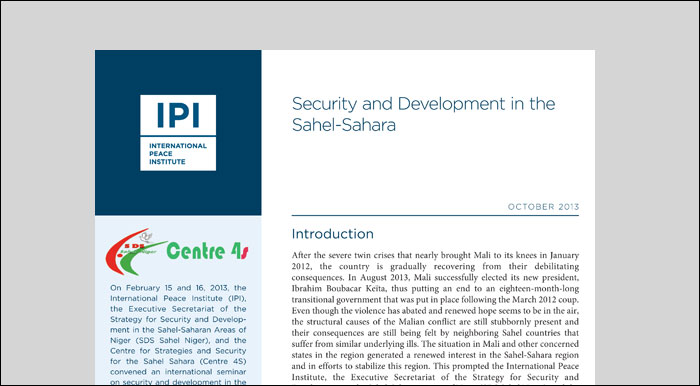 This meeting note summarizes the outcomes of an international seminar on security and development in the Sahel-Sahara, held in Niamey, Niger on February 15-16, 2013. The meeting brought together approximately eighty participants, including high-level representatives from the United Nations, African Union, and national and regional governments, as well as representatives from interested partners, donor countries, civil society, and the media. Opening remarks were given by Niger Prime Minister Brigi Rafini.

The meeting was prompted by the twin crises in Mali last year, and though the violence has abated, the structural causes of the Malian conflict are still stubbornly present, and their consequences are still being felt by neighboring Sahel countries that suffer from similar underlying ills.

The meeting was convened by the International Peace Institute, the Executive Secretariat of the Strategy for Security and Development in the Sahel-Saharan Areas of Niger (SDS Sahel Niger), and the Centre for Strategies and Security for the Sahel Sahara (Centre 4S).