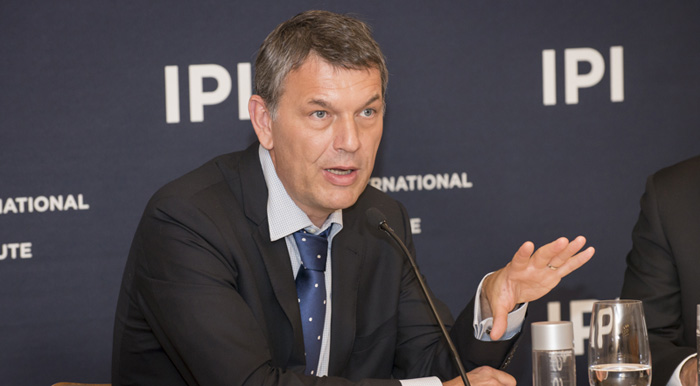 On November 7th, the International Peace Institute hosted Philippe Lazzarini, UN Resident and Humanitarian Coordinator for Somalia, to discuss whether its “New Deal Compact” could break the cycle of crises in Somalia.

The country has been essentially stateless, struggling with violence, instability, and humanitarian crises for a quarter century. However, following the election of President Hassan Sheikh Mohamud in September 2012, Somalia showed signs of stabilizing, inspiring a surge of optimism within the country and the international community. The adoption of the New Deal Compact to help build a functioning government and stabilize the country was signed in September 2013.

“[The New Deal] is a drastic change of doing business in Somalia. For 20 years, in the absence of a government and institution, the agenda was driven by the aid community,” said Mr. Lazzarini. “Today, it’s an agenda which will be driven by the Somalis.”

Mr. Lazzarini described Mogadishu today as a bustling city with a skyrocketing real estate market. He said the clamor of traffic jams and the wringing of hammers are everywhere as the capital repairs the damage from previous conflicts. “We even have a taxi cab company now,” he said. “The first yellow cab, like in New York, came four months ago.”

However, he warned that there are still many challenges facing the Somali people.

The chair of the event, Jérémie Labbé, IPI Senior Policy Analyst, contextualized the volatile situation in his introduction, pointing out that there are an estimated 3.2 million Somalis in need of lifesaving assistance.

“The fragile humanitarian situation is further compounded by predictions of below average rainfall by the end of the year that could [result] in further food insecurity at a time when Somalis have barely recovered from the famine two years ago,” Mr. Labbé added. His reference was to the 2011 crisis that claimed 500,000 lives.

“What I want to highlight here is that the gains over the last two years are reversible gains,” Mr. Lazzarini said. “The worst nightmare would be a repeat of what happened two years ago.”

Mr. Lazzarini explained that an estimated one million internally displaced people are the most destitute and vulnerable, and that there are an additional one million refugees still living in neighboring countries. He said the conditions were not yet ripe for the diaspora’s return.

In addition to these issues, the humanitarian coordinator explained that Somalia has had outbreaks of polio, with 170 people infected since 2007 when the first case was recorded. He said there have been no new cases since August of this year, however.

As in many North African nations, the youth are hugely important to the future stability of Somalia, where 70 percent of the population under the age of 30. Mr. Lazzarini said that these people so far have very few job opportunities. “There is very little other alternative than to be a part of the cycle of violence in the country,” he said.

Partnering with UNICEF and other NGOS, the new government started the first public school program in 20 years. The Go To School program, as it’s called, aims to enroll a million children in school and train 50,000 new teachers. “A few weeks after the launch of this program, 100,000 kids were back to school,” Mr. Lazzarini said.

“It has been a failed state for over twenty years, but I also believe that Somalis dream of a new Somalia,” Mr. Lazzarini concluded. “They have certainly started this new era, and they deserve our entire support.”