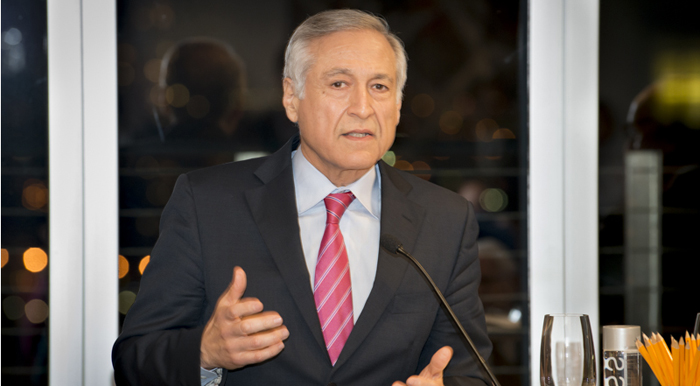 Heraldo Muñoz appeared at IPI on December 9th in a Beyond the Headlines event for his book Getting Away with Murder: Benazir Bhutto’s Assassination and the Politics of Pakistan.

Benazir Bhutto, the former Prime Minister of Pakistan, was killed in a suicide bomb attack in December 2007 at a political rally in Rawalpindi two months after she ended a self-imposed nine-year exile from the country and just eleven days before an election that could have returned her to power.

Mr. Muñoz, Chile’s former ambassador to the United Nations and the current Assistant Secretary General and Director of the Regional Bureau for Latin America and the Caribbean at the UN Development Programme, was named to conduct a UN investigation by Ban Ki-moon in 2008. He submitted the report in April 2010 and then spent two years writing this book.

He said his mandate was not to assess guilt in Benazir Bhutto’s murder, but in the investigation he found that there were many parties in Pakistan who could have wanted to eliminate her.

“She was hated by many: hated by al-Qaeda, hated by Pakistani Taliban because she was a woman first of all,” Mr. Muñoz told the audience. “She was a western-educated woman. They called her a modernist. They accused of being a Shia. They accused her of being sold to the United States and the West, and of wanting the straight oversight and control—as it should be in a democracy—of the army and intelligence services by the civilian government. All of that made her a woman hated by many but loved also by enormous amounts of people.”

Mr. Muñoz said he got little cooperation in Pakistan, noting that all of his team’s actions were leaked to the media, and that even their cook had a detailed agenda of their activities. He said that local police had washed the crime scene less than two hours after the killing, destroying almost all of the significant evidence. Normally in a crime scene like this, he said, where a man fires several shots then blows himself up, killing 38 people, there would be thousands of pieces of evidence, whereas only 23 were recovered from the site of Bhutto’s death.

“In the end, I felt we weren’t as welcome at the beginning because we were doing a very independent, in-depth investigation that would not simply be a cosmetic type of report,” Mr. Muñoz said.

He also said Ms. Bhutto knew the dangers of returning to Pakistan. On the day she returned from exile in October, a bombing of her welcome caravan left her unharmed yet killed 149 people and injured another 400. She wrote a letter to President Musharraf two days before her killing with the names of people who she believed were plotting against her, and on the morning of her assassination she told Afghan President Hamid Karzai that Pakistan’s intelligence services were conspiring against her. She had even emailed CNN’s Wolf Blitzer saying that if she were killed, she would “hold Musharraf responsible.”

Mr. Muñoz did not entirely disagree with that assessment. “General Musharraf certainly bears political and moral responsibility in the assassination as he did not provide the security that she had so urgently requested and was entitled to receive as a former prime minister, especially considering that she had been the target of a failed assassination attempt in Karachi on the evening of her homecoming on October 18th,” he said.