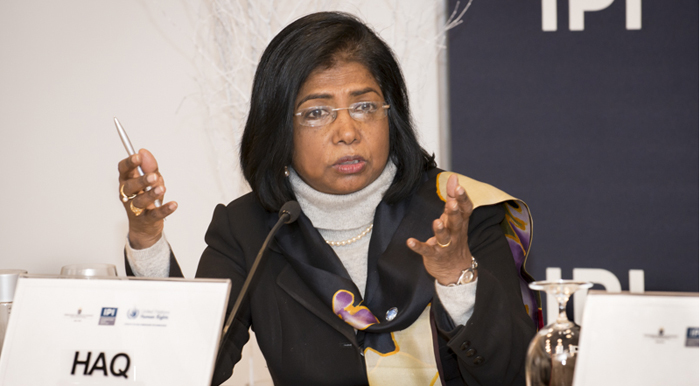 Human rights has become such an integral part of UN peacekeeping missions over the last decade that it is “part of our DNA,” said Ameerah Haq during a policy forum at the International Peace Institute on December 11th. At the event, Ms. Haq, Under-Secretary-General at the UN Department of Field Support, joined other experts to discuss human rights functions within peacekeeping missions. The event was co-organized by the Permanent Mission of Sweden to the United Nations, the United Nations Office of the High Commissioner for Human Rights (OHCHR), and IPI.

Over the last ten years, human rights components within multidimensional peace operations have grown in number and size to the point where they are now central to delivering Security Council mandates. The panelists discussed in detail how Security Council resolutions translate into action on the ground to promote human rights in conjunction with other mission components and UN actors.

The former chief of human rights for UN missions in South Sudan and Afghanistan, Richard Bennett, stressed just how crucial human rights has become. “Human rights plays an important role in prevention of deadly conflicts, in early warning, in rapid intervention, in acute phases in peacekeeping, and in transitions through recovery to stability and development,” he said. “In other words, before, during and after recovery from a serious conflict.”

1. Human rights are relevant to the full cycle of conflict, from prevention to peacemaking. Human rights violations in peace time can serve as early warnings of imminent conflict and should initiate prevention efforts. Human rights monitoring during a conflict reduces violence and civilian deaths, and provides documentation for future justice activities. Human rights reporting points to the root causes to be addressed in ending the conflict and building sustainable peace.

3. Early investment in human rights components in UN operations pays off. Human rights activities can reduce the length of conflicts, ending missions and sending troops home sooner. Integration can be reinforced with advanced planning, inclusion of human rights in mission mandates, and training of all mission staff in human rights principles and procedures.

4. Human rights advice for UN missions is becoming more robust at headquarters in order to support the expanding role of human rights in field operations. OHCHR’s mission support team, now based in Geneva, will have an increased presence in New York in the future to bolster its support to peacekeeping operations and special political missions.

Signe Burgstaller, Deputy Permanent Representative of Sweden to the UN, said that for a long time resources have been stretched in OHCHR’s mission support office, with less than ten staff members providing support to over 800 colleagues in the field.

Ivan Šimonović, Assistant Secretary-General for Human Rights at OHCHR New York, lamented this fact, noting that although human rights is the third pillar of the UN charter, it receives only three percent of its budget.

“It’s nice that we all have human rights in our DNA,” he added, “but it would be nice to have it also in the budget.”