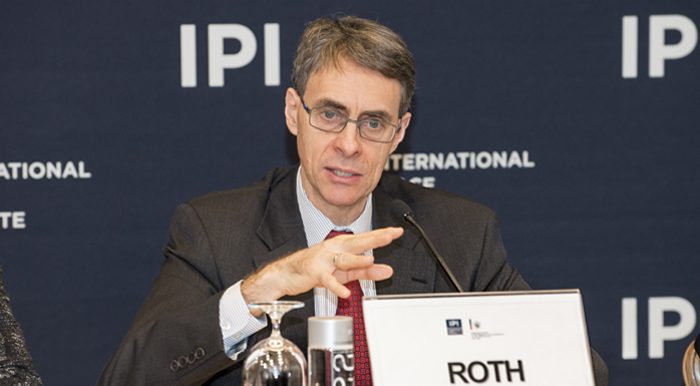 “There’s always temptation for negotiators to jettison justice” in their haste to strike a deal, Kenneth Roth, Executive Director of Human Rights Watch, told an IPI forum on war crimes accountability in Syria. But, he stressed, “I think it’s important for us to recognize that justice should be on the table at Geneva II; impunity should not be.”

The International Peace Institute cosponsored the January 17th event with the mission of Liechtenstein mere days before the Geneva II conference, a meeting of world leaders to discuss ending the Syrian civil war that has claimed over 100,000 lives and displaced millions.

Mr. Roth said both sides of the conflict have repeatedly committed war crimes. “The government has chosen not simply to shoot at combatants on the other side, but rather their probably primary war strategy is to indiscriminately fire upon urban populated areas that the opposition happens to hold with the aim of turning that population against the opposition…” he said. “This is 100 percent a strategy of war crimes.”

Several panelists noted that segments of the opposition have been responsible for executions, systematic torture, and even massacres in some instances.

The ambassador of Liechtenstein, Christian Wenaweser, explained that even the parties in the conflict do not deny these atrocities—yet all refute guilt, blaming the other side. He added that a state of lawlessness can perpetuate the cycle of violence. “The lack of accountability, the firmly established culture of impunity in Syria, leads to the repetition of these crimes,” he said.

At the same time, a tribunal that holds perpetrators responsible can have the effect of helping to stop killing in the short term and heal cultural scars over the long run, the panel agreed.

The participants weighed several ways to address the crimes committed with an independent judiciary, such as a referral to the International Criminal Court (ICC) or a Syrian court, among others.

Jeffrey S. Howell, from the Syrian Accountability Project, discussed a hybrid tribunal model with elements from both within Syria and the broader Middle East region. He noted the contentious subject of whether this court should include the death penalty, which many parties on the ground consider non-negotiable.

The ICC, considered a standard for international justice by many, does not administer capital punishment.

There are two viable options to bring Syrian atrocity crimes to the attention of the ICC, according to the panel. One is a referral by the UN Security Council, though this would likely be blocked by Russia, one of the five permanent Council members, which has close ties to the Syrian government.

Craig Charney, president of Charney Research which recently conducted a survey in Syria, said that although he found broad consensus on a desire for accountability, Syrians remain “extremely resistant” to international actors imposing outside mechanisms of justice.

Despite complications, the panelists agreed, it’s imperative to begin any peace negotiation—such as Geneva II talks—with the understanding that amnesty must not be a bargaining chip, as it undermines prospects for long-term peace by continuing a disregard for rule of law.

Justice, however complex it is to realize in situations of civil war, has the opposite effect, according to Mr. Wenaweser. “Peace and justice are complimentary, mutually reinforcing,” he said. “It’s extremely difficult to put this into practice, and I think Syria and the Geneva talks are a very stark illustration of that.”

Listen to the Global Observatory interview with Craig Charney>>