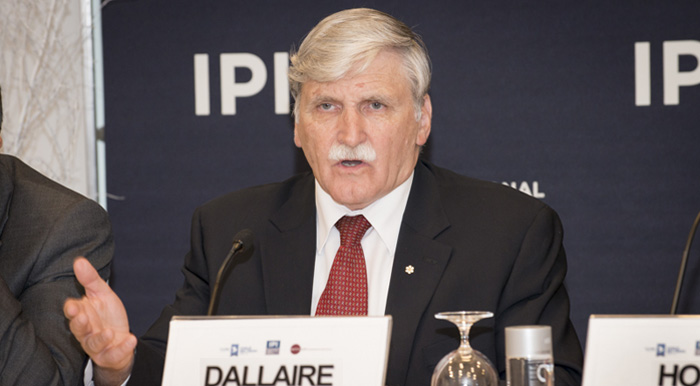 “We believe that by better training both police and military and a whole new dimension of working much closer, particularly information-wise, with NGOs and other agencies on the ground, we can work at neutralizing without destroying children as a system of weaponry in this era,” said Lt. General Roméo Dallaire (Ret.) at an IPI event on February 26th.

Gen. Dallaire spoke as part of a panel on children and armed conflict at the International Peace Institute, held as UN Security Council members prepare for the next open debate on the topic on March 7th.

The issue of child soldiers is exacerbated because young people are dynamic and easily recruited, argued Gen. Dallaire. “Be they doing logistics, running the bivouacs, being sex slaves, or up front doing the killing and maiming, they are instruments of war, and it is the most sophisticated technology, end-to-end weapon system in low intensity conflict now,” he said. “That’s why they’re using so many; that’s why it’s so effective.”

Despite the diverse use of children in armed conflict, they never volunteer for the job, said Gen. Dallaire, who was the force commander of the UN mission in Rwanda when the genocide broke out there 20 years ago. An environment of chaos, with little or no options to avoid it, automatically refutes the idea of volunteerism, he said.

Ger Dauny, a former so-called Lost Boy of Sudan, gave some context as to how young people are enlisted into fighting. He explained that armed men are always around, and that peers saw few alternatives to taking up arms themselves. “It’s not like there was some joy you wanted to get out of it. It’s just because you wanted to survive,” he said.

Gen. Dallaire explained that peacekeepers engage in combat with child soldiers only in self-defense, and reluctance to do so often prevents blue helmets from accomplishing missions. With proper training, however, peacekeepers can “re-establish security without living with the stigma and the impact of having to destroy children recruited against their will,” he said.

The French ambassador to the UN, Gérard Araud, called for better training for military and police, and said the issue was a moral as well as a security challenge. “What is the situation of the soldier when he discovers that he has just killed someone who is 14 or 15 years old?” he asked. “That, of course, has a toll.”

The panel agreed that the use of child soldiers is a liability to police, military, or armed groups because it impacts effectiveness and increases the risk of criminal prosecution in international tribunals. Raising awareness of these dangers could curb the recruitment of children into armed conflict, they argued.

He noted that his department has developed training standards “based very much on General Dallaire’s handbook.” He added that in early April, the UN peacekeeping organization launches six training modules with scenario-based exercises, among other drills.

Until now, training on how to handle child soldiers was done on an ad-hoc basis, he said, but now it was becoming “much more systematic.”