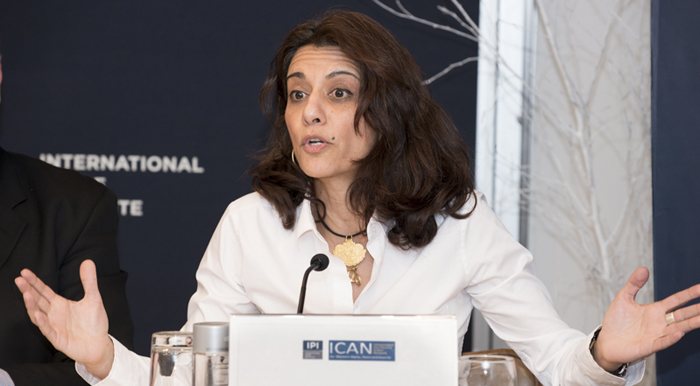 That’s the question often asked by policy makers who exclude women from official peace processes, said Sanam Naraghi Anderlini, Co-Founder of the International Civil Society Action Network, on March 12. She spoke as part of a panel on inclusive peacemaking at the International Peace Institute.

“These are people who are standing up in the middle of the most horrendous, dangerous situations,” Ms. Anderlini said of women peace activists. “They’re not standing up with weapons; they’re standing up with their voices and their values, and we have international colleagues who say, ‘Who are they, anyway?’ That’s outrageous.”

As for the effect this has on peace itself, Ms. Ó Súilleabháin said that while 42 percent of peace agreements fail within five years, inclusion of members of civil society reduces that risk by 64 percent.

Women not only understand dynamics on the ground but also exemplify stronger commitments to justice and reconciliation, Ms. Anderlini argued, in part because they are the ones who suffer the most.

Voices from the Ground

During the civil war in Bosnia and Herzegovina, women were the first to bridge barriers between conflicted entities and ethnic divisions, said Samra Filipovic-Hadziabdic, Director of the Gender Equality Agency of Bosnia and Herzegovina. What set them apart was “the strength to stand up straight and do something in order to help somebody else,” she explained.

Sabah Alhallak, a Syrian lawyer and women’s rights activist, said women understand the importance of seeking justice in the peace process. She told the story of a refugee who, after having witnessed “cars and trucks carrying the bodies of our children,” said that the smell of blood remained with her. “How can she forgive if I don’t tell her that the testimony will help in treating the murderer to justice?” Ms. Alhallak asked.

Women—and civil society overall—bring the absolutely crucial “reality of that finger on the pulse of communities” to peace talks, said Mirsad Jacevic, the Bosnian Vice Chair at The Institute for Inclusive Security. The international community recognizes this in the midst of war, he added, “but we fail to do that when the bullets stop.”

“What are these thousands of papers and documents and, I don’t know, negotiations?” asked Farida Allaghi, a prominent Libyan peace activist. ”It’s not doing any change for anybody, believe me.”

Over the last three decades, Dr. Allaghi held various positions at the UN before earning her current title, Secretary-General of Mentor Arabia for Drug Prevention among Children and Youth. She passionately condemned what she said was the international community’s complacency on women’s involvement in peace processes.

That nearly half of all peace accords stumble in the first five years makes the “international systems more irrelevant,” contended Ms. Anderlini. She added that unless the international community considers other approaches to peacemaking, the world will become a “much more dangerous place.”

In closing, she asked, “Why do we systematically silence and delegitimize the voices who are courageous enough to stand up not using violence?”