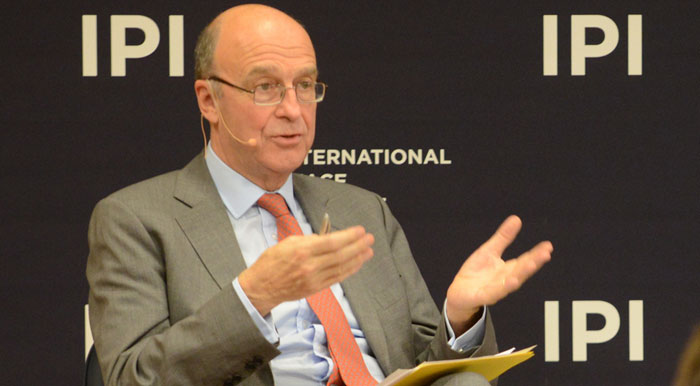 Lebanon has exceeded expectations in dealing with the continuing fallout from the crisis in neighboring Syria, said Derek Plumbly, United Nations Special Coordinator for Lebanon, on March 26th. Speaking at the International Peace Institute, Mr. Plumbly praised the Lebanese people for “actually sustaining a measure of stability in their country.”

Since civil war broke out three years ago in Syria, roughly 1 million refugees have fled across the border into Lebanon, a country that had a population of fewer than 5 million before the crisis started. Rather than set up camps, Lebanon has tried to accommodate the refugees by temporarily integrating them into Lebanese society.

The more than 20 percent swell in total population, however, has significantly strained Lebanon’s economy as well as the security and political spheres, Mr. Plumbly said. “All three areas have been deeply affected by the Syrian crisis,” he said.

He said the hardest hit areas are some 200 cities and towns, mostly in the north, where refugee density is highest, with Syrians vastly outnumbering Lebanese in some areas and creating competition for resources—including jobs, housing, and basic services such as water, electricity, and plumbing.

Empty streets in Beirut with boarded up restaurants and grocery stores reflect the findings of a recent economic assessment by the World Bank, Mr. Plumbly said. The report found growth at a complete standstill over the last two years, he explained.

Arguing that an upsurge of terrorism adds to mounting tension between refugees and locals, Mr. Plumbly noted that there have been nine suicide bombings since last November, including the first political assassination in many years.

“As this has gone on, a polarization and a growth in extremism reflect the tensions between the communities,” he said, adding that this has also strained the authority of the government.

Nevertheless, the Lebanese people—many of whom remember their own bloody civil war that ended in 1990—remain resolved not to be drawn into the fighting, the UN official argued. “People are very conscious of just how appalling it will be if they go over the edge,” he said, “and that, I think, does give a measure of restraint.”

With thousands of Syrians crossing the border daily and no end to the conflict in sight, he said, the situation remains “extremely volatile.”

The Lebanese government is determined to avoid delaying the presidential and parliamentary elections scheduled for later this year, noted Mr. Plumbly, and he called on the international community to continue to support Lebanon.

We need to help keep things “on course, institutions in place, capable of dealing with challenges that arise” because the Lebanese need support. “And standing with them as they do so—delivering on these various support agendas—is enormously important.”

The event was moderated by Warren Hoge, IPI Senior Advisor for External Relations.