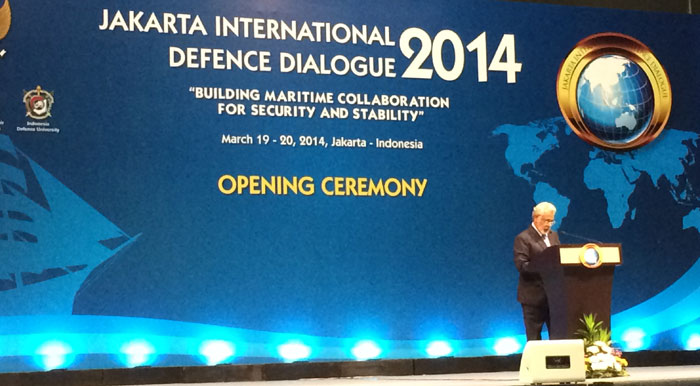 “The sea is at the center of the Asia-Pacific region; it has the potential to unite us, but also risks dividing countries in the region,” Indonesia’s Defense Minister Purnomo Yusgiantoro told an audience of 1,000 as he opened the fourth annual Jakarta International Defense Dialogue (JIDD).

The 2014 JIDD centered on the theme of maritime collaboration for security and stability, a pressing topic for many countries in the Asia-Pacific region. The JIDD seeks to contribute to an environment of lasting peace in the Asia-Pacific, characterized by cooperation, transparency, and trust among governments and militaries.

The forum, organized by Indonesia with the support of IPI, was held on March 19th and 20th and attracted high-level participants from 46 countries. In five thematic sessions, the conference addressed the rise of the Indian Ocean and its geostrategic implications, managing contested waters and territorial disputes, coping with non-traditional security threats, modernizing and stabilizing maritime forces in the region, and strengthening legal and diplomatic cooperation at sea.

IPI assisted the government of Indonesia with the design of the conference agenda and the selection of expert panelists to participate. During an extended stay in Jakarta, IPI staff visited with Indonesian officials to explore additional opportunities for cooperation.