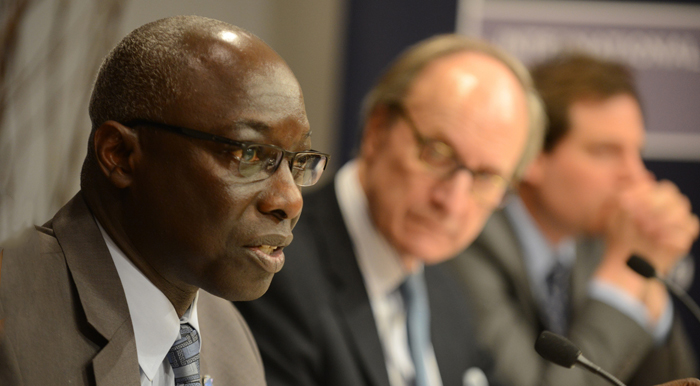 Genocide is a process with many “signposts along the road,” said Adama Dieng, Under-Secretary-General and Special Adviser to the UN Secretary-General on the Prevention of Genocide, on April 22nd. “What we need is not more early warning, but early action,” he added at a panel discussion on the lessons learned in the 20 years since the Rwandan genocide.

There have been numerous improvements in genocide prevention efforts, “many derived explicitly from Rwanda,” said panelist Scott Straus, Professor of Political Science and International Studies at University of Wisconsin-Madison and author of the book, The Order of Genocide: Race, Power, and War in Rwanda.

Mr. Straus noted some marks of progress: peacekeeping has better troop strength, mandates, and rules of engagement; both early warning systems and policy framework have improved, especially the adoption of the Responsibility to Protect principle and the Rome Statute, which established the International Criminal Court. Finally, he said, we now understand the importance of Security Council buy-in for prevention efforts, even if we don’t always have it.

And yet, Mr. Straus added, the international community has yet to learn many lessons. He said most people believe that the lines between perpetrators and victims of atrocities are always distinct, but the truth is usually more complex. “It is rarely the case in which one side commits atrocities while the other does not,” he explained.

Seeing these crimes through a lens of “good guys and bad guys” can “inadvertently provide a sense of impunity to those who are labeled the good guys,” he said. This occurs during crises as well as afterwards, as seen in the fallout from the Rwandan genocide, where violence spread into the Democratic Republic of the Congo (DRC).

The war that broke out in the DRC, noted Mr. Dieng, drew in eleven other states from the region, claiming the lives of some 5.4 million people over the ensuing years.

This horrific tale attests to not only the failure to intervene earlier in the Rwandan genocide, but, more importantly, the cost of inadequate prevention, he argued, saying that the price of not preventing atrocities is huge, not only in terms of lives lost but also the huge financial costs of peacebuilding as well as repairing public faith in and the capacity of government. These costs are paid by people in addition to national and international organizations, he said.

Justice and prevention are “mutually reinforcing,” he said, and each dollar invested in strengthening accountability and rule of law has exponential returns in the prevention versus intervention equation.

Mr. Straus argued against an all-or-nothing interpretation of intervention, explaining that even late action is better than none at all. If the Security Council had acted in Rwanda even as late as mid-April, he contended, hundreds of thousands of lives could have been saved. Even if they’re not perfect, he said, “half-step measures” can save many lives in terrible situations.

All the panelists raised this sentiment with regards to current crises, such as in South Sudan or the Central African Republic.

Eugenie Mukeshimana, a survivor of the Rwandan genocide and Founder and Executive Director of the Genocide Survivors Support Network, said radio programs promoting xenophobia, violence, and hate speech from Rwanda 20 years ago sound eerily similar to recent broadcasts coming out of South Sudan and elsewhere. “When do we say enough is enough?” she asked. “We have to figure out where that line is and what to do when it is crossed.”

The ongoing crises in the world are evidence of the work yet to be done, Mr. Dieng concluded.

The event was cosponsored by the International Peace Institute and the United Nations Office on Genocide Prevention and the Responsibility to Protect. It was moderated by Warren Hoge, IPI Senior Adviser for External Relations.