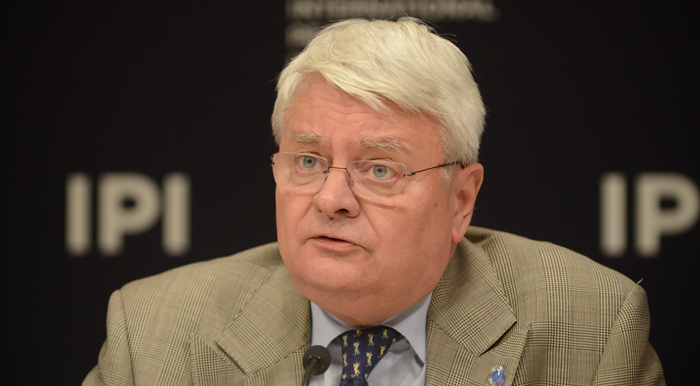 With peacekeeping forces facing heightened threats in the field, and with greater expectations from local society as well as international actors, it’s imperative that the United Nations “works in the 21st century and not the 19th or early 20th century,” said Hervé Ladsous, Under-Secretary-General for the UN Department of Peacekeeping Operations. The embattled eastern region of the Democratic Republic of the Congo is the UN’s “experimental theater” for drones, he said, adding that it’s “one of our laboratories” for other technologies as well.

Mr. Ladsous joined a two-panel event at the International Peace Institute on April 7th to discuss technology and innovation in peacekeeping, cosponsored by the Permanent Mission of Italy to the UN.

Although the UN uses unmanned aerial vehicles (UAVs) strictly for reconnaissance, host countries as well as neighboring states are nevertheless apprehensive, said Ambassador Masood Khan of Pakistan. “It is taken for granted that such vehicles collect sensitive information of topography, of terrain, of location of strategic and military” sites, he explained.

Governments want assurance that the UN won’t share this sensitive information, be it now or 20 years in the future, he added. “This trust deficit has to be bridged.”

Other actors are concerned that technology will replace peacekeepers, said the ambassador from Pakistan, which, with 8,000 troops abroad, is the largest contributor to UN peacekeeping. The kinds of new technology the UN employs, however, stray far from the “typical corporate office automation,” he said. “Technology is a supplement and not a substitute for the human peacekeeper presence in the field.”

All principal armies have taken steps toward “the use of high technologies,” and peacekeeping forces should be no exception, argued Ambassador Sebastiano Cardi of Italy. Besides UAVs, peacekeepers could benefit from night vision assets, geographic information systems, and satellite imagery, he said, adding that whatever the technology, security is paramount.

“The security of the peacekeeper is indispensable to the peace that is to be kept,” Mr. Khan said. To illustrate the point, he quoted the former UN force commander Lieutenant-General Roméo Dallaire, who said, “We cannot afford to be deaf and blind in the field.”

People focus solely on UAVs, said Ameerah Haq, Under-Secretary-General for the UN Department of Field Support. “But there is a whole host of work that goes on in each one of these peacekeeping missions that lend themselves to better use of technology.”

Beyond security measures, she explained, missions could benefit from satellite imaging, to locate water for digging wells, among other uses; solar and other renewable energy systems; and numerous tools to facilitate logistics and procurement of mission supplies.

Ms. Haq recognized the strides private companies have made in the tech sector and pushed for more public-private collaboration.

The day after the meeting, the mission in the DRC was to reach “full operational capacity,” which would provide information to assess whether the UN would continue using UAVs, noted Mr. Ladsous. A special body was being assembled to analyze long-term use of many new technologies in the field, including drones, he added.

“We are not trying to impose,” he said. “We are just trying to do a better job for the sake of the mandates that the membership has entrusted with us.”

Mr. Khan noted that import/export constraints in host countries is one of the political challenges, but that open dialogue such as the kind IPI promotes helps to dispel “misgivings and sensitivities” and “narrow the gap in this trust deficit” among stakeholders, he said.

Mr. Khan concluded by quoting Woodrow Wilson, from the Paris Peace Conference: “The League of Nations should be the eye of the nations, to keep watch upon common interests, an eye that does not slumber, an eye that is everywhere, watchful and attentive,” he said.

The first panel was moderated by Francesco Mancini, IPI Senior Director of Research.

Technology in Peacekeeping: On the Ground

The second panel focused on peacekeeping needs in the field and what new equipment and technologies could have the most impact on making peacekeeping missions more effective.

In terms of technology, “force requirements are relatively simple and low in UN peacekeeping,” said Andreas Joedecke from the Office of Military Affairs at the UN Department of Peacekeeping Operations (DPKO). “We have a lot of tech within the missions, but not on a systematic basis, and, in many cases, it’s at the initiative of the member state that is adding to their contingents.”

Equipment standards for UN police (UNPOL) mandate little more than a gun, bulletproof vest, and helmet, noted Tunde Igaz from the Police Division in the Office of Rule of Law and Security Institutions, UN Department of Field Support. UNPOL needs more water cannons, she said, as well as metal detectors to locate hidden arms in refugee camps, among other equipment.

Given the rarity of forensic kits, most criminal procedures are based on “interrogation and confession,” she said. “If you want to effectively fight against transnational organized crime, we need to assist evidence gathering in the host states,” she argued.

Mr. Joedecke noted several surveillance technologies that are working well in select missions. In addition to setting up CCTV cameras along camp perimeters, he said, a crane device that lifts cameras and infrared radar hundreds of meters skyward can enable mission camps to scan the surrounding area miles out.

The Lifeblood of Situational Awareness

Information communication technology (ICT) is crucial to providing mission staff with up-to-the-minute data, said Suzanne Shanahan from the ICT Division of the UN Department of Field Support. In recent years, she added, the UN has become increasingly focused on collaboration and information sharing within mission components as well as regionally to other missions and non-UN local actors.

ICT is “sort of the lifeblood of situational awareness,” she said, and her department is also working on how to use crowd-sourced big data from social media, SMS, and other forms of mobile technology.

Peacekeeping needs a link between the private sector and the United Nations that could enable a collaborative environment, contended Luigi Piantadosi, Vice President at Finmeccanica, a technology development company.

Private tech companies many innovative gadgets that the UN could employ, he added. For example, biometric handheld devices could be used to gather basic health and identifying information as well as fingerprints of refugees, he explained, or water generators that pull moisture from the air can now provide up to 4,000 liters of potable water a day.

It’s important to remember that just because a technology exists does not mean it’s the most effective or efficient, said Kurt Chesko from Mine Action Service at DPKO. He added locating mines is sometimes a “low-tech problem with a low-tech solution” such as de-miners looking and digging with a shovel.

Ms. Shanahan agreed with her colleague. “One of our greatest obstacles is balancing all the new and shiny tools that are available with what practically works in the field,” she said.

The second session was moderated by Adam Smith, Senior Fellow and Head of Peacekeeping Operations Program at IPI.